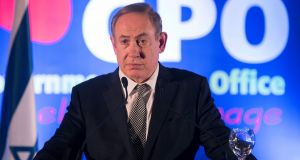 Israel’s prime minister Binyamin Netanyahu has urged the US to veto a UN Security Council draft resolution calling for an immediate halt to settlement building on occupied land that Palestinians want for a state. Photograph: Atef Safadi/EPA

Egypt postponed a UN Security Council vote on Thursday on a resolution it proposed demanding an end to Israeli settlement building, diplomats said, after Israel’s prime minister and US president-elect Donald Trump urged Washington to veto it.

Egyptian president Abdel Fattah al-Sisi told Egypt’s UN mission to postpone the vote, which would have forced US president Barack Obama to decide whether to shield Israel with a veto or, by abstaining, to register criticism of the building on occupied land that the Palestinians want for a state, diplomats said.

In a sign that they feared Mr Obama might abandon the United States’s long-standing diplomatic protection for Israel at the United Nations, Mr Trump and Israeli prime minister Binyamin Netanyahu urged the White House to veto the draft resolution.

Mr Sisi put off the vote after a request from Israel, two sources familiar with the matter told Reuters. Egypt was the first Arab state to make peace with Israel. Any council member can propose a draft resolution. Council member Egypt worked with the Palestinians to draft the text.

Mr Netanyahu took to Twitter in the dead of night in Israel to make the appeal, in a sign of concern that Mr Obama might take a parting shot at a policy he has long opposed and at a right-wing Israeli leader with whom he has had a rocky relationship.

Hours later, Mr Trump, posting on Twitter and Facebook, backed fellow conservative Mr Netanyahu on one of the most contentious issues in the Israeli-Palestinian conflict and the pursuit, effectively stalled since 2014, of a two-state solution.

“The resolution being considered at the United Nations Security Council regarding Israel should be vetoed,” Mr Trump said. “As the United States has long maintained, peace between the Israelis and Palestinians will only come through direct negotiations between the parties, and not through the imposition of terms by the United Nations. This puts Israel in a very poor negotiating position and is extremely unfair to all Israelis.”

Egypt circulated the draft on Wednesday evening and the 15-member council had been due to vote at 3pm (8pm Irish time) on Thursday, diplomats said. It was unclear, they said, how the United States, which has protected Israel from UN action, would vote.

It also expresses grave concern that continuing settlement activities “are dangerously imperilling the viability of a two-state solution”. The White House declined comment. Some diplomats hoped Mr Obama would allow Security Council action by abstaining on the vote.

Israel’s security cabinet was due to hold a special session to discuss the issue. Israeli officials voiced concern that passage of the resolution would embolden the Palestinians to seek international sanctions against Israel.

In Beirut, French foreign minister Jean-Marc Ayrault told reporters: “The continuation of settlements is completely weakening the situation on the ground and creating a lot of tension. It is taking away the prospect of a two-state solution. So this could reaffirm our disagreement with this policy.”

Mr Obama’s administration has been highly critical of settlement construction in the occupied West Bank and East Jerusalem. US officials said this month, however, the president was not expected to make major moves on Israeli-Palestinian peace before leaving office in January.

Mr Netanyahu tweeted that the United States “should veto the anti- Israel resolution at the U.N. Security Council on Thursday”.

Israel’s far-right and settler leaders have been buoyed by the election of Mr Trump, the Republican presidential candidate. He has already signalled a possible change in US policy by appointing one of his lawyers, a fundraiser for a major Israeli settlement, as Washington’s ambassador to Israel.