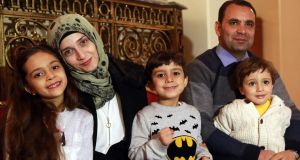 Bana Alabed, the young Syrian girl who drew global attention with her tweets from Aleppo before being evacuated to Turkey this week, says she hopes to go back to her hometown one day and fulfil a dream.

“When I grow up I want to become a teacher and go back to Aleppo and teach the children of Aleppo,” Bana said in an interview in Ankara on Thursday.

The seven-year-old and her family were led safely from the rebel-held eastern part of Aleppo this week and later arrived in Turkey where they met president Recep Tayyip Erdogan at his palace in Ankara on Wednesday. Turkey has supported rebels fighting Syrian president Bashar al-Assad.

With the help of her mother Fatemah, who manages the @AlabedBana account, Bana has shared pictures and videos of life during the nearly six-year-old Syrian war, amassing some 364,000 followers since joining the micro-blogging site in September.

Her messages would show her at home or outside, at times inspecting the rubble in besieged Aleppo.

“I asked my father to film me near my school . . . and I asked him if it was okay to tweet it,” Bana told Reuters. “We used Twitter to make the voice of Aleppo children reach the world.”

According to the latest United Nations figures, at least 34,000 people have been evacuated from east Aleppo in a week-long operation following a crushing government offensive.

Asked to describe daily life in Aleppo, Bana said: “There was bombing and our house was bombed but we survived, we felt afraid and went down the basement.

“There were a lot of stones and dust. We were about to die, but thank God we survived. My school and my garden were bombed. I miss my house.”

Reuters could not immediately verify the events described by Bana. Last month, Fatemah sent harrowing messages describing the bombardment of their house alongside a picture of her daughter covered in dust.

Asked about some critics deeming the account a fake one, Fatemah said the speculation made her “nervous and angry”.

Bana also drew the attention of some famous Tweeters, including Harry Potter author JK Rowling, who along with her agent sent the young girl e-books about the famous boy wizard.

Asked whether they were adjusting to their new life in Turkey, Fatemah said in English: “When we hear [the] sound of car that’s hurried, we think it is the sound of bomb so we [freeze].

“But I am happy that my kids now live in peace and have time to think about their future and maybe I will make them go to school.”