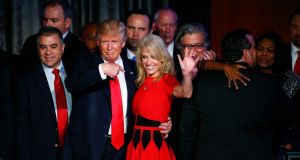 US president-elect Donald Trump on Thursday named his former campaign manager Kellyanne Conway to serve as counsellor to the president, his transition team said in a statement.

Conway (49), who is currently a senior adviser on Trump’s transition team, is widely credited with helping him bring the more disciplined approach to campaigning that helped him win the November presidential election.

In her new post, Conway will play a key advisory role in the White House when Trump takes office on January 20th, helping to manage the New York businessman’s messaging and legislative priorities, according to the statement.

“She is a tireless and tenacious advocate of my agenda and has amazing insights on how to effectively communicate our message.”

In an interview with ABC News shortly after the announcement, Ms Conway said Mr Trump was finalising his communications staff and was preparing to announce his choices for White House press secretary and related posts soon.

Mr Trump has held several rallies since winning the November 8th election but has not taken formal questions from reporters.

Speaking about the issue on ABC’s Good Morning America programme, Ms Conway pointed to the time Mr Trump’s has spent forming his cabinet.

“He’s been very busy doing that,” she said.