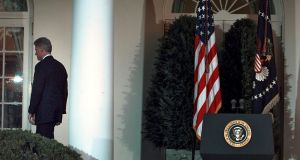 Bill Clinton returns to the Oval Office after offering an apology for his actions during a Rose Garden speech on December 19th, 1998, the day the House of Representatives voted to impeach him. Photograph: Paul Hosefros/New York Times

The US House of Representatives is expected to vote on Wednesday on House Resolution 755: “Impeaching Donald John Trump, President of the United States, for high crimes and misdemeanors.”

It will be only the third time in US history that the House has held a vote on impeachment – the provision set out in the constitution to remove a sitting president.

While Trump will become one of only a handful of US presidents accused of impeachable offences, he can take solace from historical precedent. No president has ever been removed from office.

The only two presidents to be impeached – Andrew Johnson and Bill Clinton – were subsequently cleared by the Senate, where a two-thirds majority is needed to convict a president. Nixon resigned before the expected impeachment vote took place.

These were the three cases concerned:

On February 24th, 1868, the then much smaller House of Representatives voted by 126 to 47 to impeach Democrat Andrew Johnson, mainly over his decision to remove secretary of war Edwin Stanton in the turbulent post-civil war years. Johnson was cleared in the subsequent Senate trial.

Richard Nixon, then in his second term, had been plagued by the Watergate scandal, which emerged in 1972 after five men were arrested for breaking into the Democratic headquarters in the Watergate complex in Washington DC. Following Senate committee hearings throughout 1973, the appointment of Archibald Cox as special prosecutor, and the subsequent “Saturday Night Massacre” when Nixon pushed out Cox and senior justice department officials, in May 1974 the House judiciary committee began impeachment proceedings. It ultimately passed three articles of impeachment against Nixon. Though the proceedings then moved to the full US House of Representatives, the vote never took place as Nixon resigned on August 8th after several Republicans indicated that he had lost their support.

The Republican-controlled House led by Newt Gingrich voted in October 1998 to commence impeachment proceedings against Clinton over the fallout from his liaison with White House intern Monica Lewinsky, based largely on the findings of a report by special counsel Ken Starr.

The House judiciary committee passed two out of three articles of impeachment. As is the case with Donald Trump, the president faced a pre-Christmas vote. On December 19th, 1998, the House of Representatives impeached Clinton – the first charge of perjury was endorsed by a 228-206 vote, while the second, obstruction of justice, was passed by 221 -212.

On February 12th 1999, after a five-week trial in the Republican-controlled Senate, Clinton was cleared on both charges. 45 senators voted to convict him on the first charge of perjury, with 55 opposed, while 50 members of the Senate voted in favour of the second article of impeachment – obstruction of justice – with 50 voting against. Clinton went on to serve the remainder of his second term in office.

5 Divers steal beer being aged by sunken ship off Argentina