Uighur homestays by cadres extends surveillance to within the home, local Muslims say 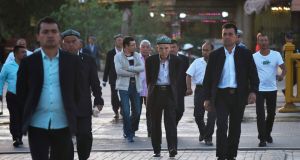 China is ramping up a programme to send cadres to stay in the homes of Xinjiang’s ethnic minorities, a policy the government calls an affectionate cultural exchange aimed at fostering harmony, but one many residents see as an invasive effort to monitor and indoctrinate the Muslim community.

Under the “Pair Up and Become Family” programme, more than a million public servants are assigned families in Xinjiang they must visit and stay with regularly.

Cadres must stay at least five days every two months, according to a Xinjiang official, and should also visit on public holidays and during special events like weddings, funerals and birthdays “as they quickly become like family”.

Officials were now being pressured to increase the frequency and length of their homestays, the government worker said.

“The leaders want us to go more often to our village families and build our relationships,” the official, surnamed Liu, said. “It is important that the minorities better understand each other to help in China’s development.”

Cadres were also being allocated additional families to visit, in a bid to expand the project’s reach, she said.

As with other programmes in Xinjiang, it is presented as being a part of the government’s poverty alleviation efforts, where in this case individual officials are dispatched to support and mentor their designated families.

It is one of several policies targeting Uighurs and other Muslim ethnic minorities in the province, which has also seen the development of an expansive re-education camp network over the past three years where well over a million people have been interned. The government has defended the camps as de-redicalisation centres and part of their counter-terrorism initiatives.

The region lies under a thick blanket of security, with ubiquitous facial-recognition CCTV cameras, fixed and random armed checkpoints, and police “convenience stations” at every corner. Security staff in bullet-proof vests check IDs and wave scans at entrances to supermarkets, department stores, hotels, chemists, parks, mosques and museums, among many other venues.

Under the “Become Family” programme, the surveillance extends to within the home, local Muslims claim. Families say they do not have the option to refuse the visits, as any display of resistance would place them under scrutiny as a potential troublemaker or radical, which could land them in prison or in the extrajudicial camp system.

The World Uighur Congress, an exiled group based in Germany, condemned the project as in-home spying and forced assimilation.

“The programme has turned Uighur homes into prisons from which there is no escape,” a spokesman said.

A Uighur from Kashgar called Yimamo said that not only was the intention to spy on the families and report everything back, but the “relatives” also came to instil Han-centric, Communist-party ideologies into the Muslim, Turkic-speaking households.

“They just want us to be like them. It is simple. It is just like that,” he said. “We should speak Mandarin. Give up our religion – or at least keep our faith very quiet. Love the party and the motherland.”

When cadres came to visit in his area, they had a routine where people had to attend Chinese flag-raising ceremonies, study the latest speeches by China’s Communist Party leader Xi Jinping, watch Beijing-approved TV shows and study Mandarin, he said.

Relations between the two ethnic groups have long been tense and the communities tend to lead largely segregated existences. Han Chinese form about 92 per cent of the country’s population, but in Xinjiang Uighurs make up the majority with about 46 per cent of the province’s 22 million people, while Han account for 40 per cent.

When the Communists came to power in 1949 Xinjiang’s Han population was only six per cent, but waves of often state-sponsored migration saw the numbers rocket in recent decades.

Tensions between the two communities have often resulted in an outbreak of violence, most notably 10 years ago when deadly race riots left at least 200 people dead in the provincial capital of Urumqi.

“We always see them as like colonial invaders. They see the Uighurs as backward people who need the civilised Han to educate them and to save them. But now they are our so-called relatives and we are meant to be happy. It is stupid,” Yimamo said.

Darren Byler, a Xinjiang scholar from the University of Washington, said the programme was “a deeply invasive policy that strives to transform the lives of Uighurs and other Turkic Muslims through transformations and surveillance of domestic spaces”.

The primary targets of the system were the family members of detainees and prisoners, he said.

China announced recently it was closing down the camps, “as all the students had graduated”. The move came after multiple leaks of internal Chinese government documents, including the China Cables featured in The Irish Times, that detailed the operations behind the repressive policies and led to increased international condemnation.

Some of the leaked papers instructed officials to pay particular attention to detainees and their families and to monitor the daily movements of former detainees for at least a year after they had been released.

During his research into the area, Dr Byler gained access to the manuals the cadres were given to prepare for the home visits. The manuals instructed them to look out for, among other “politically incorrect” actions, signs of overtly religious behaviour. Was there a Koran in the home? Was anyone praying or fasting during Ramadan? Was a little sister’s dress too long or a little brother’s beard irregular? It all went into the notebooks and on to online databases.

The visitors were also instructed to ask if their hosts had relatives living abroad, or if they had any knowledge of Arabic or Turkish. Had they attended a mosque outside of their village? All potentially suspect behaviour. They were advised to ask children the same questions separately, to check if answers matched.

The visiting cadres were instructed to tell their “little brothers and sisters” that they have been monitoring all internet and cell phone communication, so they should not even think about lying.

“Everything would be factored into the recommendations the big sisters and brothers would make about which of their hosts would be allowed to remain at home in their villages, with their children, and which ones should be sent away to have their defects repaired by the state,” Dr Byler said.

The first is that some of the visitors bring alcohol, cigarettes and pork into the homes and push them on the Muslim guests. Afraid to seem overly zealous, the Uighurs feel obliged to partake despite it running counter to their beliefs, one allegation goes.

The second is that some Han men sleep in the beds alongside women in the house, often while their husband or father is in a prison or camp. There have been allegations of sexual harassment and rape. A video clip of a man introducing his “new family” and boasting about how he was going to have sex with the 18-year-old Uighur girl went viral last week, further inciting the anger.

Some locals said that officials told them if visiting men do share beds with women they should sleep one metre apart.

The government denies both of these allegations.

Ms Liu, the cadre, said officials pay for food and presents for their families out of their own pockets.

“We care for them. We make sacrifices for them. We would never do anything improper or disrespectful,” she said. “And visiting men cannot sleep in bed with a woman. That is not allowed.”

With the Chinese New Year coming up in January, gift-bearing Communist party “relatives” will be arriving into Muslim homes all over the province. The official People’s Daily has applauded the programme and sees no grounds for controversy, writing: “The ‘relatives’ get closer and closer, the friendship gets stronger and stronger . . . the true feelings of brothers and sisters, watching and helping each other are flowing everywhere.”

It concluded an extensive focus on the project by saying: “the cadres and people of all ethnic groups in Xinjiang hold together as tightly as pomegranate seeds, and their life is as sweet as [the local] apples.”