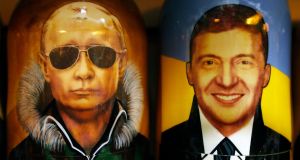 The Kremlin has denied ordering a broadcaster to stop showing a sitcom starring Ukrainian president Volodymyr Zelenskiy, after a crude joke about his Russian counterpart Vladimir Putin was edited out of an early episode.

In Servant of the People, Mr Zelenskiy plays a hapless history teacher who is propelled to the Ukrainian presidency when a student films him ranting about the country’s corruption and his diatribe goes viral online.

The sitcom’s popularity helped sweep Mr Zelenskiy (41) to the real-life presidency in April, and on Monday he met Mr Putin in Paris for their first round of talks aimed at ending the five-year conflict between Russia and Ukraine.

In an apparent bid to benefit from media coverage of the meeting, the TNT channel gave Servant of the People its Russian premiere on Wednesday, but at least one of the jokes seems to have upset an influential segment of the audience.

In an early scene, a close adviser is seen helping Ukraine’s novice president choose a new wristwatch from a lavish collection, and tells him that Mr Putin, for example, wears a timepiece made by Swiss manufacturer Hublot.

“Hublot” sounds like “khuilo”, a crude term for the male organ that Ukrainian protesters have used in chants about Mr Putin since their 2013-2014 revolution against corruption and Russian influence.

Viewers watching Servant of the People in the Russian Far East and parts of Siberia saw the scene, but by the time the comedy was shown in central and western Russia on Wednesday evening, it had been edited out.

Russia’s Vedemosti newspaper reported that the sitcom had been set to continue this week on TNT – which is owned by the media arm of state-controlled gas firm Gazprom – before abruptly vanishing from the schedules on Wednesday night.

Gazprom Media insisted that it had not changed its plans for Servant of the People. It was now available on an online subscription service, and had been bought with that intention, the company said, while describing the episodes broadcast on TNT as part of a “planned marketing strategy”.

“This subject has nothing to do with the presidential administration,” Kremlin spokesman Dmitry Peskov said on Thursday.

“In this case we absolutely do not interfere and have no right to interfere in editorial policy, what they plan to show and in what format,” Mr Peskov added, while denying that it was now effectively forbidden to mock Mr Putin on mainstream Russian media.

Earlier this week, Mr Peskov said he doubted that Russia’s leader of the last two decades would watch Servant of the People: “He doesn’t watch series, so I’m sure that he has not and will not watch it, because he doesn’t have any time.”