Paris Letter: ’Tis the season to be gloomy as city brought to a standstill over pensions 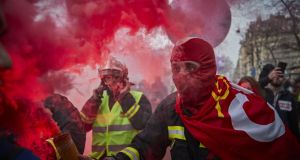 A fireman holds a flare aloft during a rally near Place des Invalides in Paris as thousands take to the streets to protest against pension reform on the sixth day of national strikes in France. Photograph: Kiran Ridley/Getty Images

Tuesday is the 13th day of mass strikes and demonstrations in France over president Emmanuel Macron’s reform of the pension system.

There is no Christmas cheer, only gloom, cold rain and a transport nightmare. Train and railway workers, teachers, civil servants, lawyers, judges, doctors and other medical personnel will all march again on Tuesday, for the third time since December 5th.

It feels like an absurdist play where protagonists are doomed to keep repeating the same words and actions, over and over. The trade unions demand complete withdrawal of the reform. The government refuses to give in to blackmail.

I have fared better than most, because I live centrally and own a bicycle, though I’ve been soaked to the bone

In the meantime, there are 600km of tailbacks in the Paris region every rush hour. The men who came to repair my boiler on Monday leave home in the suburbs at 4.45 each morning.

It’s that or spend four hours in traffic. They were cheerful about it, and one said he thought it was reasonable to be asked to work longer, since our life expectancy has risen. It was the first time I heard a French worker say that.

I have fared better than most, because I live centrally and own a bicycle, though I’ve been soaked to the bone in the rain. Hordes of bicycles and skateboards wend through traffic and invade pavements. The city’s Vélib system cannot cope with demand.

The strike brings out the worst in people. Shopkeepers are cranky. An irate motorist screamed at me when the plastic-covered tip of my handlebar brushed the side of his car in a monumental traffic jam. A friend witnessed a fist fight when a passenger tried to push his way onto a packed metro car.

Everything seems to occur in slow motion. The Christmas presents I ordered online haven’t arrived. The post office is closed, its letterbox overflowing. Public radio, usually a reliable source of news, is also on strike. Hotels report record low occupancy.

The country feels adrift. Leaders don’t lead and trade unions glory in their ability to wreak havoc. The strike might have been avoided, if Macron and prime minister Édouard Philippe had not talked about a “malus” – the opposite of a bonus – for people who stop working before a new “pivot age” of 64.

Three hundred thousand employees at the SNCF railway and RATP Paris transport authority are the knot of the problem. Under their special regime, some still retire with full pensions at age 52. Macron is determined to end that.

Four economists who helped inspire Macron’s economic programme signed an opinion piece in Le Monde saying the de facto age of retirement would rise in any case, because the new points system would give French workers an incentive to work longer.

French people retire earlier, and with a higher percentage of their salary, than just about anyone else in the EU

It’s an existential struggle for both sides. If Macron caves in, he risks being a lame duck for the rest of his term. If the unions fold, they’ll lose credibility with members.

As with most conflicts, the obvious compromise is already writ large. If the government drops all mention of the cursed number 64, it stands a reasonable chance of pushing through its universal points system.

The government has not presented its case well. Philippe mentioned once, in passing, that France will still have the highest level of pension coverage in the world, even after the reform. Surely worth repeating?

The new French EU commissioner, Thierry Breton, said the pension reform is needed to meet EU requirements. I’ve heard no French official point out that French people retire earlier, and with a higher percentage of their salary, than just about anyone else in the EU.

Jean-Paul Delevoye, Macron’s “Mr Pensions”, spent two years planning the reform. He was the main interlocutor between the government and unions, but was forced to resign on Monday after it emerged that he had “forgotten” to list board positions and outside remuneration on his declaration to ethics authorities.

The neo-communist CGT dominates the railway company, and looks like becoming the Grinch that stole Christmas. There’ll be no Christmas truce, CGT leader Philippe Martinez swears, as millions put holiday plans on hold.

A reunion with six friends was to have been the highlight of my weekend. We gave up when the Eurostar bringing three from London was cancelled.

A flurry of commiserating emails flew across the Channel. The Paris outing was meant to console the London friends for Brexit. A half-English, half-French friend on the Paris side of the aborted gathering wrote sadly: “I’m not sure which of our two beloved countries fills me with greater despair at the moment.”