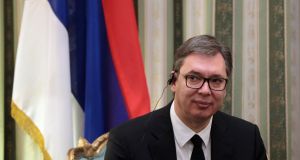 Serbian authorities are under pressure to end the house arrest of a whistleblower who exposed shady arms deals allegedly involving the father of interior minister Nebojsa Stefanovic, a close ally of president Aleksandar Vucic.

Aleksandar Obradovic was arrested in September after leaking documents that appeared to show that a firm linked to Branko Stefanovic was securing cut-price weapons for resale from a state-owned Serbian arms maker called Krusik.

Amid protests and civil society outrage, Mr Obradovic was freed from detention in October, and on Monday activists delivered a petition with 25,000 signatures to the Serbian prosecutor’s office demanding his release from house arrest. The high court in Belgrade will rule on his further detention on Wednesday.

Police accuse Mr Obradovic of leaking trade secrets from Krusik, while Mr Vucic has said he is not a whistleblower but part of opposition attacks on the government, and Serbian defence minister Aleksandar Vulin has dubbed him a spy.

Opposition parties say the scandal shows how graft and cronyism have flourished under Mr Vucic and highlights the “state capture” of the judiciary, prompting them to threaten to boycott next year’s parliamentary elections.

“I know the truth about the arms trade and they know that well,” Mr Obradovic said of government officials who have denounced him.

“And the truth is so clear, simple and, I’m afraid, dangerous and painful for all of them,” he told the Danas newspaper in an interview published on Tuesday.

Serbian prime minister Ana Brnabic said on Sunday that Mr Obradovic was not a whistleblower because he had not complained to the Serbian authorities but leaked documents to a Bulgarian portal called Arms Watch, while on Tuesday Mr Vulin said the affair was “not a scandal but an operation”, hinting at the involvement of a foreign intelligence agency.

Mr Obradovic told the Balkan Insight news service in October that he had tried to tell Krusik executives and trade unions about the alleged wrongdoing, but did not trust the state authorities to deal with it.

Mr Stefanovic rejects the claims about his father and appears to remain close to Mr Vucic, who also refused to sack his finance minister and friend Sinisa Mali when Belgrade University ruled last month that he had plagiarised his doctoral thesis.

“Despite glaring evidence of widespread corruption, the only response from the public prosecutor has been to place the scandal’s whistleblower . . . in custody,” Serbian opposition leaders Dragan Djilas, Nebojsa Zelenovic and Dejan Nikolic said in an opinion piece on Tuesday.

“This shows that the judiciary is being abused to serve the regime of president Aleksandar Vucic,” they wrote on the Euractiv website.

“We therefore urge EU leaders to help us achieve the following: Media freedom. Free and fair elections. An independent and functioning judiciary. Only by achieving this, can we realise our European future.”