Frank McDonald: I was a visitor to Notre Dame the day it blazed 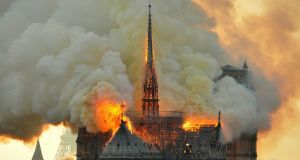 Notre Dame: flames and smoke billow from the roof of the Paris cathedral. Photograph: Thierry Mallet/AP

I’m still recovering from the awful experience of witnessing Notre Dame de Paris burn, having been in the great cathedral for the umpteenth time earlier in the day.

It was a tragic spectacle that I’ll never forget as long as I live. In the meantime, I hold a rare honour of having been among the estimated 30,000 visitors on that fateful day, because it will likely take a lot longer to reinstate and reopen to the public than the madly ambitious five years flagged by French president Emmanuel Macron.

Last Monday morning, we had joined a very long, informal queue snaking across the Parvis – that large open space in front of Notre Dame – with my brother Liam and his extended family, including four children, most of whom were visiting Paris for the first time.

As we got close to the entrance, beneath all the statues of French kings and saints, I pointed out the one of St Denis, who’s carrying his head, having been decapitated by the pagan Romans in AD 270 for being a Christian evangelist.

A few nights earlier, we all had dinner in Comme Chai Toi, on Quai Montebello. I had deliberately chosen it for our first family meal in Paris, not just because it’s one of those “sympa” restaurants you can find on the Left Bank, but really for its view of the southern side of Notre Dame.

After all, the wildly expensive Tour d’Argent has been trading on it for decades, as does Le Zyriab, a lovely Lebanese restaurant on the roof terrace of Jean Nouvel’s Institut du Monde Arabe, one of Francois Mitterrand’s “grands projets”.

Of course, I had been in Notre Dame on countless occasions since my first trip to Paris when I was 18, long after reading Victor Hugo’s novel about the hunchback, Quasimodo.

Often, I would bring friends and time our visit to coincide with the Sunday afternoon organ recital that would pack the cathedral. To walk around it when the entire volume of the interior is filled with organ music was one of my great delights, even though I’ve described myself In Truly Frank: A Dublin Memoir as a “recovering Catholic”.

It always represented the distilled essence of the city and France itself, having witnessed so many momentous events over the centuries

The Gothic building always seemed to be undergoing restoration, and it was difficult to take pictures of it without scaffolding up on one part or another. I was also aware that it had been altered by works carried out over the centuries, notably by Eugène Viollet-le-Duc in the 1840s.

He creatively reinterpreted its medieval heritage just as he went on to do in Carcassonne, inventing the castellation of its once-crumbling walls and the conical towers that are so much part of its image today.

My only contribution to Facebook, before I dumped my account after the Cambridge Analytica scandal, was to post a picture I took of Notre Dame glinting in strong winter sun during the Paris climate summit in December 2015.

For me, it always represented the distilled essence of the city and even of France itself, having witnessed so many momentous events over the centuries, from the coronation of French kings (and, of course, Napoleon Bonaparte) to the beatification of Joan of Arc.

“Just think of all the Te Deums that have been offered here over the centuries,” I said to Liam as we entered the cathedral and then lit candles in memory of our parents.

Hundreds of tourists were walking slowly around the ambulatory, looking at the various shrines, the beautiful rose windows, the woodcut medieval tableaux, and constantly taking pictures with their smartphones or milling around the souvenir shop. There was a choir singing Gregorian chants, greatly adding to the atmosphere.

We could never have imagined that Notre Dame would be engulfed by a devastating fire less than seven hours later. As the shocking news came through, we headed out in disbelief to see what was happening.

At first, I thought it was probably a minor outbreak that would be quickly brought under control. But it wasn’t. Clouds of yellow smoke were billowing from the cathedral, where the central spire had already collapsed and the entire roof was on fire, glowing brightly in the dusk.

Thousands of bewildered people had gathered along the quays of the Seine, a few kneeling in prayer while some sang Catholic hymns, hoping for some miracle, as police sirens cut through the evening air.

Everyone was looking sadly towards the twin towers of the cathedral on Ile de la Cité, which had been sealed off so that the fire brigade – les Sapeurs et Pompiers de Paris – could get on with their work. They were nearly all taking pictures or making short videos with their smartphones.

“We’re watching from quay in front of Hotel de Ville, as are thousands from every vantage point,” I told friends in a text message.

“Fire has consumed the roof and now spread to the north tower. That’s where [some of] ]the bells are. All so terrible, beyond belief. And we were there this morning. Jesus wept!”.

But the firefighters managed to quench the outbreaks of fire in both towers, thereby saving the new bells, which had been installed just in time for Easter in 2013 to mark Notre Dame’s 850th anniversary.

I recalled having the privilege of seeing the entire set of nine bells when they were lined up in the nave for a month, after they had been processed through the city on a low-loader, down the Champs Élysées, onto the quays of the Seine and into the cathedral. Cast in Normandy, with the large “bourdon” (bumblebee) bell made by the Royal Netherlands Foundry, they replaced an older set of bells that were widely regarded as ill-tuned. I even bought a small souvenir brass bell, for €38, as a memento of the occasion.

But my favourite souvenir from the cathedral is an LP (and a back-up CD), entitled Grandes Heures Liturgiques a Notre-Dame de Paris, featuring all the classics, including Te Deum, Magnificat, Tantum Ergo and De Profundis. It also begins with a ringing of the old bells, including the bourdon. There is nothing more evocative of how Notre Dame felt than this record of its bells being rung, its great organ played and its choir singing their hearts out. (It’s a mercy that the organ miraculously survived the fire).

Back in Paris a few months later, I heard the new bells ringing for the first time, and they sounded so much better. We had also listened to them ringing at noon last Sunday while waiting on Quai Montebello for a “hop-on, hop-off” Batobus to take us to the Musée d’Orsay, and they were as sonorous as ever.

And on Monday night, after witnessing the fire, we only returned to our lodgings when we were sure that the twin towers were no longer in danger. By then, Paris was a city in mourning for the damage done to Notre Dame.

It was not until after we got back from witnessing the fire that it really hit me how sad and surreal it was. One of my nieces, Kate Brogan, sent a WhatsApp message to our family chat group that consisted solely of a cartoon sketch showing a Charles Laughton-like Quasimodo, with a very sad expression on his face, hugging the cathedral’s great west front.

I immediately forwarded it to several friends in Ireland and elsewhere, saying “I cried when I got this, and you probably will too”.

Anyone who loves Paris would.