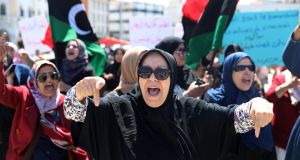 Libyan women shout slogans during a demonstration to demand an end to Khalifa Haftar’s offensive against Tripoli, at Martyrs’ Square in the capital on Wednesday. Photograph: Hani Amara/Reuters

Shells slammed into a densely-populated district of Tripoli overnight on Tuesday, piling misery on civilians from a two-week assault by commander Khalifa Haftar’s forces to take Libya’s capital from an internationally-backed government.

About 10 Grad rockets hit the southern residential area of Abu Salim just before midnight on Tuesday, witnesses and authorities said, killing at least seven people, mainly women, and wounding 17. Some of them lost limbs.

Both sides blamed each other for the attack, the most intense yet on a residential area. Abu Salim is near a main point of entry into the city of about 2.5 million people.

Retired public servant Hadia al-Hariri was sleeping next to his wife when a shell hit the dining room of their two-storey house in Abu Salim, wounding her and their three-year-old son in the head. He rushed his other five children to a relative.

“We’ve heard gunfire every night, but now I’m really afraid,” Mr Hariri said as neighbours consoled him in a narrow street where remains of a Grad could be seen by his front door.

“This war can go on for months . . . I don’t know what to do next,” he said, clearing debris from burned shelves and shattered window glasses in the dining room with a gaping hole in the front wall.

Mr Haftar and his eastern Libyan forces have cast their advance as part of a campaign to restore order and defeat jihadists in nation gripped by anarchy since the 2011 overthrow of Muammar Gadafy.

But the internationally-recognised Tripoli government of prime minister Fayez al-Serraj – which has kept him at bay in the southern suburbs – views the 75-year-old general as a dangerous would-be dictator in the Gadafy mould.

The United Nations says thousands of civilians are trapped in southern districts of Tripoli due to the fighting. Rescuers and aid workers are struggling to reach them and electricity, water supplies and telecommunications have been badly disrupted.

Nearly 20,000 people have fled homes, some seeking shelter elsewhere in Tripoli but most heading out. At least 14 civilians have been killed – along with scores of fighters – and about 36 wounded during the offensive, according to UN tallies issued prior to Tuesday night’s barrages.

UN Libya envoy Ghassan Salame, who lives in Tripoli and has been pushing a peace plan, condemned the shelling.

“Killing innocent people is a blatant violation of international laws,” Mr Salame said in a tweet.

International powers are aghast at the flare-up in Libya, which has scuppered a United Nations’ peace plan, threatens to disrupt oil supplies from the Opec nation, and may unleash a new wave of illegal migration across the Mediterranean to Europe.

But no common position has emerged given different sympathies towards the factions round the Gulf and Europe. – Reuters