Ex-president of Peru takes own life shortly before arrest 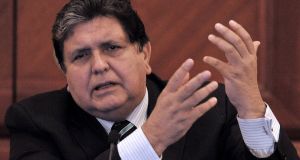 Peru’s former president Alan Garcia has died after deliberately shooting himself when police tried to arrest him in connection with a multibillion-dollar Latin American corruption scandal.

“I am saddened by the death of former president Alan Garcia,” tweeted the country’s current president, Martin Vizcarra, confirming the news. “I send my condolences to his family and loved ones.”

Earlier, Garcia’s lawyer, Erasmo Reyna, told local media his client “took the decision to shoot himself” early on Wednesday after officers arrived at his home in the capital, Lima, to place him under preventive detention.

Peru’s interior minister, Carlos Moran, told journalists Garcia had told police officers he was going to call his lawyer and had “shut himself in his bedroom” before a shot was heard.

The 69-year-old politician – who is facing accusations of taking bribes from the Brazilian construction giant Odebrecht during his 2006-2011 presidency – was admitted to a nearby hospital soon after, at about 6.45am, suffering from a gunshot wound to the head.

Before his death was confirmed Peru’s health minister, Zulema Tomas, told reporters Garcia was in a “very serious” condition and had suffered three heart attacks from which he had been resuscitated. A 27-strong medical team, including neurosurgeons and intensive care specialists, was fighting to save the former president’s life.

“This is a day of national grief,” Alberto Quintanilla, a left-wing congressman, told local television after confirmation of Garcia’s death.

“Peru is in mourning. Our political system is mourning and we express solidarity with the family. What has happened is very regrettable.”

Garcia is one of four former Peruvian presidents to be sucked into the vast Odebrecht scandal – by which multimillion-dollar bribes were paid to secure construction contracts across the region – alongside Pedro Pablo Kuczynski, Ollanta Humala and Alejandro Toledo.

Last week, a judge ordered that Mr Kuczynski be placed under preventive custody for 10 days as part of a money-laundering investigation. Known as PPK, Mr Kuczynski led Peru from 2016 until he resigned last March before a congressional move to impeach him over links to Odebrecht.

Garcia served two terms as president – from 1985 to 1990 and then 2006 to 2011 – and is one of Peru’s most prominent politicians. He rejected claims of wrongdoing, painting himself as the victim of political persecution. Last year he unsuccessfully requested political asylum in Uruguay after seeking shelter in its embassy in Lima.

“I have never sold myself and this has been demonstrated,” Garcia tweeted on Tuesday.

In an interview on Tuesday, Garcia said he “emphatically” rejected the accusations against him which he described as “speculations” and “moral assassination”.

“At this moment of profound pain we must reaffirm our unity and our brotherhood,” tweeted congressman Jorge del Castillo, calling on supporters to gather outside the party’s headquarters on Wednesday night.

Another ally, Mauricio Mulder, described Garcia’s decision to take his own life as “an honourable act” taken in response to the “fascist persecution” of political foes. – Guardian

1 Man found guilty of murdering girlfriend during drinking session
2 Postmortem results on mother and two children found dead in Dublin due on Friday
3 Cork shootings: Father and sons to be buried in two separate funerals
4 First full moon on Halloween night since 1955 will be rare ‘blue moon’
5 The real Contagion virus is out there and it’s causing virologists to worry
Real news has value SUBSCRIBE