Both major parties call for ‘fair go’ for voters, with ruling coalition trailing in polls 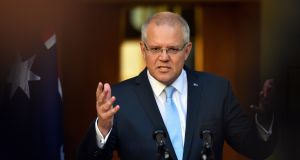 Australians will go to the polls on May 18th after the prime minister, Scott Morrison, visited the governor general – Queen Elizabeth’s representative in Australia – to ask that parliament be dissolved.

Mr Morrison’s Liberal-National coalition has clung on to power as a minority government since losing a byelection last October, caused by the resignation of former prime minister Malcolm Turnbull after he was deposed in an internal Liberal coup.

Both major parties used the phrase “fair go” in making their pitch to voters.

“I believe in a fair go for those who have a go. And what that means is, part of the promise that we all keep as Australians is that we make a contribution and don’t seek to take one,” said Mr Morrison.

Opposition Labor leader Bill Shorten said his party believes in ensuring “the economy works in the interests of working and middle-class people – when everyday Australians are getting a fair go, this economy hums”.

If the polls are correct, Mr Shorten will become Australia’s sixth prime minister in six years. Labor has led in almost every poll over the past three years. In two polls published this week, Labor led 53 per cent to 47 per cent after preferences in one, and 52-48 in the other.

Climate change is shaping up to play a major role in the campaign. The coalition said it expects electric vehicles to make up 25 per cent of new car sales by 2030, while Labor has set a target of 50 per cent of all new cars being electric by the same year. This led Mr Morrison to say Labor’s “detail of it is all fluff”.

With the election campaign’s initial focus being on the two contenders for prime minister, it was difficult for minor parties to get a look in. But Greens leader Richard Di Natale did his best to offer an alternative to the old guard. “We believe that the foundations of a decent society are providing services for people, so while Liberal and Labor want to have a fight about tax cuts, we’re saying let’s invest in the foundations of a decent Australia,” he said.

Voting is compulsory in Australia, with about 96 per cent of eligible voters already registered. Australians living abroad can vote at embassies and consulates for up to three years after they have left the country.