For Trump to succeed, he must fail on immigration 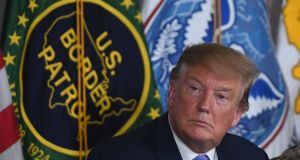 US president Donald Trump at a roundtable discussion on immigration and border security in Calexico, California, on April 5th. Photograph: Saul Loeb/AFP/Getty Images

“Poor Ike,” said Harry Truman of Dwight Eisenhower, his successor-elect as US president in 1952. “He’ll sit here and he’ll say ‘Do this! Do that!’ And nothing will happen.”

Used to armies, who mostly do as instructed, the great Allied commander now had to run something as opaque and unresponsive as the federal bureaucracy. He fared well enough in the end – behold those interstate highways of his – but another golf nut and political rube has fulfilled Truman’s wry prophecy after all.

With most of his presidential term already behind him, Donald Trump is still fiddling dissatisfiedly with a government he regards as unco-operative. The immigration apparatus is a special nuisance to him. He has edged out Kirstjen Nielsen as the secretary of homeland security. He has withdrawn his nominee to run Immigration and Customs Enforcement. He is toppling the leadership of the US Citizenship and Immigration Services.

The reason for this cull? As he sees it, bureaucratic squeamishness in the enforcement of his will. With his aide Stephen Miller, a rare survivor in the Trump court, he takes on the officials who fear his policies test the limits of the law, if not of conscience.

You can smell the political anxiety. With an election just 18 months away, Trump does not have much to show his voters on immigration. He says “Do this” and “Do that”. And nothing, or at least not enough, happens.

He should hope this failure continues. Trump’s best chance of re-election is not the still-purring economy or some deus ex machina in foreign affairs. It is the continuing salience of immigration. He does not need to fix the problem: the deep stock of unprocessed asylum claims, the thousands who arrived at the southern border from Central America last month. He just needs voters to have it at the front of their minds in November 2020.

If anything, a solution to the present troubles would free Americans to transfer their focus to other subjects. Given the unpopularity of his 2017 tax cuts, his tin-eared crusade against Obamacare and the unlikelihood of any other domestic feat under a now-Democratic House of Representatives, he cannot afford that. Immigration is the one domestic theme that suits him. It also discomfits the Democrats, who are tugged this way by liberal activists, and that way by vague awareness of a more conservative nation out there.

As distasteful as it is to view a humanitarian crisis in the making through the lens of politics, such is the duty of this column. And such is the instinct of a politician. It is in Trump’s interest to major on immigration in 2020, and perhaps even run a single-issue campaign. For that, the subject has to be of immediate, living concern to voters. The worst thing he could do before then is fulfil his promise to bring immigration under control.

It is perverse, I know, that a president could make so little progress on his number-one priority during four years in office, only to be rewarded for it. Ever since he was elected, his enemies have waited for his inevitable failure to “deliver” for his voters, who would then see through him and come sheepishly back to the political mainstream. The non-materialisation of his wall against Mexico felt like the cue for such a mass epiphany.

But this always assumed that Trump is judged as conventional politicians are judged. In fact, populists do not live and die on their record. They live on a sense of rolling crisis. Their usefulness lies in the airing of public concerns that elites would rather ignore. Once those concerns are fixed, they become redundant. The British Eurosceptics who vote against the hardest available Brexit seem to intuit this. Their relevance in public life depends on the continuation of the very things – EU regulations, freedom of movement – that they are against. What would be the point of a President Trump in a time of low, well-managed immigration?

This is what distinguishes the populist from the ideologue, for whom the ultimate goal is actual change through government policy. Miller is an ideologue. Trump is a populist. The first man’s interest is in reduced immigration. The second man’s interest, whether he knows it or not, is in a national mood of immigration crisis circa autumn 2020.

If even he cannot control the borders – voters might think – then perhaps the system is rigged after all. The swamp thwarted me in fixing immigration, he will say to them. Now give me a mandate to finish the job. You need only imagine what finishing the job might entail to see what an unpleasant election awaits us. – Copyright The Financial Times Limited 2019