Officials at odds over fate of 2,500 sleeping rough in rat-infested camps 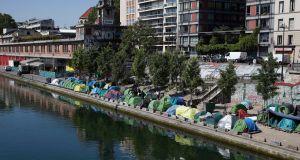 Tents where migrants live in a makeshift camp are packed alongside of the canal Saint-Martin in Paris on May 18th. Photograph: Francois Mori/AP

Some 2,500 migrants from Africa, Asia and the Middle East are sleeping rough in three dirty, rat-infested and drug-riddled encampments in northeast Paris while the city’s socialist mayor, Anne Hidalgo, and interior minister Gérard Collomb, a former socialist, trade insults over their fate.

Hidalgo wants the government to provide shelter for the migrants. Collomb announced on May 23rd that the Paris encampments will soon be evacuated. Since 2015, the authorities have moved 28,000 migrants out of Paris in 35 different operations, he noted.

The largest concentration of migrants is known as Le Millénaire, (Millenium) after a nearby shopping centre at the Porte de Villette, which is also home to the Philharmonic orchestra and the science museum. Estimates of the population of Le Millénaire range from 1,600 to 2,300 people, squeezed into a few hundred metre stretch along the canal. The authorities put up barriers after two migrants fell in and drowned.

In a detailed study of the encampments, Libération newspaper found that Christians and Muslims have self-segregated, with Sudanese, Malian and Ivorian Muslims on one side of the canal, and Eritrean and Somali Christians in tents on the opposite bank, which has the only water tap. Egyptian boys live in about 30 shacks further south, while a few dozen Afghans live apart from the others, at the northern end of the Millénaire.

Some 350 people, mainly Malians and Sudanese, have regrouped at the Porte de la Chapelle, where the government removed 4,000 migrants in 2016.

At the third camp, near the Jaurès metro station, 500 people, mostly Afghans, live in 100 tents crowded under a bridge.

Hidalgo has provided lodging for 2,500 migrants in the capital over the last three years, and set up six emergency reception sites. But the interior ministry, according to Pierre Henry, the director general of the France terre d’asile association, “has been convinced for a long time that the worse people are treated, the more migrants are dissuaded from coming”.

Local inhabitants complain that a small percentage of migrants are turning to alcohol and aggressive begging, Henry told Le Monde. One finds “just about every kind of addiction” in the La Chapelle camp, he said.

Volunteer doctors with Médecins du Monde are treating increasing numbers of migrants injured in fights. In mid-May, the Archdiocese of Paris denounced a “total absence of humanity” regarding the Paris migrants.

This year’s government budget decreased the number of beds in “welcome and orientation centres” known as CAOs from 10,000 to 6,000 nationwide. The government centres are 98 per cent full.

Hidalgo has written to Collomb and to prime minister Edouard Philippe, asking for the government to lodge the migrants. Collomb wrote back, reproaching her for not filing an official request for evacuation of the camps. The migrants need shelter, not expulsion, she replied.

Paris town hall did not make formal requests for the last 35 evacuations, and Hidalgo sees the statement over the migrants as an example of “Hidalgo bashing” intended to prevent her re-election in 2020. President Emmanuel Macron’s party, La République en Marche, hopes to win control of the capital. Hidalgo’s entourage say the government wants residents to blame her for the deteriorating situation.

Collomb said 40 per cent of asylum applications are filed in Paris, which has only 2 per cent of beds for asylum seekers. He denounced “the refusal of the city to request the evacuation of its public spaces” and said he would ask the prefect of police “to correct this shortcoming”. He promised the authorities will undertake “administrative checks” of the migrants, which could spell expulsion from France for many.