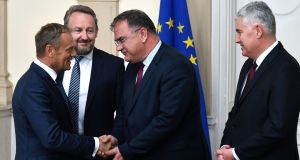 Bosnia and international organisations are calling for urgent action to manage a surge in the number of migrants arriving in the country, which people smugglers are now using to bypass tighter borders along the “Balkan route” to the European Union.

More than 1,800 migrants have entered Bosnia so far this year – well over double the number for the whole of 2017 – overwhelming the country’s state accommodation facilities and leaving hundreds of people sleeping rough in the capital, Sarajevo, and elsewhere.

They arrive from Montenegro having travelled through Turkey, Greece and Albania, and also enter from Serbia, where several thousand people have been stuck since Balkan states officially closed their borders to migrants in March 2016, after a million people crossed the region en route to the heart of the EU the previous year.

Bosnia’s two centres for a total of about 200 asylum seekers and illegal migrants are full, so local authorities and volunteers are scrambling to find beds for a growing number of people from the Middle East, Central Asia and North Africa.

The Bosnian government last week ordered ministries to devise an action plan to boost accommodation and border security, amid fears that summer could see rising health problems among the migrants and disruption to the tourist season.

“I would guess it will be a month-and-a half or so, optimistically, before additional official accommodation is available,” said Peter Van der Auweraert, the representative of the International Organisation for Migration (IOM) in Bosnia.

“In the meantime, the number of people is likely to keep increasing...In a month-and-half we could have another 600-700 people on Bosnia’s territory, depending how easy it is for them to move on to [EU member] Croatia, ” he told The Irish Times.

“The risk is that, if there is no rapid response, a manageable situation could turn into a ...mini-humanitarian crisis.”

The IOM has praised the response of Bosnian volunteers and the public at large, and Human Rights Watch (HRW) noted how “private citizens, many of whom experienced horrors during the (1992-5) Bosnian war and displacement, have been largely supportive and offered help to refugees and migrants”.

“However these noble efforts are not a substitute for effective state action...Bosnian authorities and their international partners should work to ensure that the country is capable to respond in ways that respect human rights and refugee law,” HRW added.

The Bosnian government has insisted that migrants “will be adequately assisted and authorities are already trying to find new locations to accommodate them in a human and dignified manner”.

A joint Bosnian and Croatian police operation last week led to the detention of about 20 people who are suspected of smuggling up to 200 migrants through the two countries; Bosnian media said the suspects were from Croatia, Bosnia, Turkey and Kosovo.

“There is a long tradition of smuggling [in the region] and they are simply diversifying their business,” said Mr van der Auweraert.

“In addition to maybe smuggling drugs and weapons, they are now involved in people smuggling...the networks are already in place.”