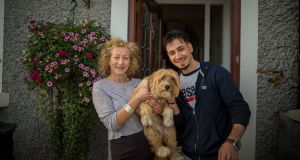 Mary O’Reilly does not consider opening her home to a stranger a big deal. She grew up in a household of lodgers and knew the empty bedroom could be put to good use.

The decision to pledge a room to a refugee was a no-brainer, she says.

“I have a lovely house, the bedroom was here and I felt bad I wasn’t doing something. This, for me, was the easy way to help. As a child I grew up with lodgers; people who worked in the local hospital, teachers and engineers. My mother had a mortgage to pay and was a widow, she needed the money. I was used to always having people around,” she said.

“It wasn’t seeing the child on the beach that pushed me to do something, it happened before that. I think it was when I saw all the people on the television, the hoards of them fleeing across Europe until they were caught at fences and not allowed cross the borders. Something pulled at me, a realisation that it could have been me. You really are just a circumstance of your birth.”

In September 2015, Mary joined more than 800 Irish people in pledging a room in her home to a refugee arriving in Ireland.

The Government had committed to welcome up to 4,000 men, women and children into the country from camps in Greece, Italy and Lebanon and Irish people were eager to offer a helping hand to the new arrivals. However, nearly two years passed before Mary finally received a call from the Irish Red Cross asking her whether she’d like to house a Syrian man.

“The wait was frustrating because there were all these students coming to Dublin looking for rooms. But I knew they would come eventually so I held on.”

Mary had taken early redundancy from work to look after her mother who died a few years later. She was eager to put the empty bedroom to good use and immediately agreed to welcome Wassim Kharita.

Arrived in Ireland from Greece

Wassim (26) arrived in Ireland from Greece in May 2016 with his teenage cousin. They had crossed the Aegean Sea by boat from Turkey in January leaving behind their families in Lebanon.

Wassim grew up in the city of Al-Zabadani in a mountainous region in southwestern Syria close to the Lebanese border. His father worked as a carpenter and the family ran a farm where they grew apple and peach trees. “It used to be a visitor spot for tourists,” says Wassim.

“Syria is not green like here but my city had many trees. We had lots of farming but there are no farms left now. All the green is gone and all our homes are gone. But I don’t cry about our homes because there were humans who died. You can always build another home when the war ends but humans cannot come back.”

In 2013 his family fled to Lebanon and in 2016, Wassim and his cousin embarked on the journey to Europe.

After arriving in Ireland, Wassim spent more than a year living in the Hatch Hall direct provision centre in Dublin city centre until he received a call offering him a home in Baldoyle. “I had told [the Department of] Justice that I felt very bad in Hatch Hall and needed to move. They said they would find me a house but that took a long time so they talked to the Irish Red Cross.”

Mary and Wassim met briefly in July 2017 and the following week he moved into her home. She knew very little about him, only that he was 26 and had arrived from Greece the previous year.

“What else did I need to know?” asks Mary. “I knew he’d been vetted and was already in Ireland more than a year when he moved into this house.

Meanwhile, Wassim was trying to remember the advice he was given by a woman named Helen from the Department of Justice who helped him settle in during his initial weeks in Ireland. “She told me to look at people’s eyes because Irish people speak with their eyes. And it’s true.”

Wassim now wakes each morning to a view of Ireland’s Eye with the Irish Sea stretching out towards the horizon. He takes English lessons during the day and works in an Arabic restaurant in Temple Bar at night.

Wassim admits the initial weeks in Baldoyle were challenging but now he feels very settled. “It was hard at the start because my English was weak but now that I can talk it’s easier. I can feel it getting better and living in this house and working helps.”

In November, Wassim’s parents and younger siblings arrived in Ireland after a Dutch artist living in Dublin offered to pay for their airfare. “When I saw my mum in Dublin Airport I hugged her for five minutes. She means so much to me, especially because I am the eldest son.”

The family now live in Tullamore and Wassim visits them each weekend.

Mary says having Wassim live in her home has broadened her mind and would encourage anyone who has considered offering a room to a refugee to take the leap and sign up.

“It’s opened my world. I’ve learned so much about Syria from Wassim. Originally my friends thought I was a bit mad to take him in but now they admire me. What I’m doing is no big deal. I’ve just given him a bed.”

Wassim says he is hugely grateful, not only to Mary, but to all the people who have supported and helped him since he arrived in Dublin.

“Before I came to Ireland I didn’t know anything about Irish people. The weather is very different, everything is different here. But people here have been very friendly.”