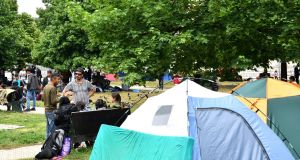 Migrants gather in a park across from City Hall in Sarajevo on May 3rd. In an election year, the issue is becoming a source of political tension in the country. Photograph: Elvis Barukcic/AFP/Getty Images

A United Nations agency is urging EU and Balkan states to help Bosnia manage thousands of migrants who are already in the country and hundreds more who arrive each week, as they try to reach wealthy countries in the heart of Europe.

As EU and Balkan leaders prepare to meet for a summit on Thursday, Bosnia is struggling to cope with up to 2,500 migrants now on its territory – well over three times the number who arrived during the whole of 2017 – many of whom are now sleeping rough in city parks.

“Numbers continue to increase,” said Peter Van der Auweraert, the representative of the UN’s International Organisation for Migration in Bosnia.

“Last week we had 640 new registered arrivals, and in the last four weeks we have had 1,800 arrivals in a total of about 3,600 since January. So clearly the trend is accelerating,” he added

“We estimate there are now up to 2,500 migrants and refugees here,” he said, noting that more people were arriving from the south and from Serbia, and that increased security on the Croatian frontier was making it harder for them to move on from Bosnia.

Ahead of the EU-Balkan summit in Bulgaria, he told The Irish Times that the issue “should be discussed because this is not just a Bosnian problem”.

“The people coming to Bosnia are trying to move from one EU country, Greece, to another one, Croatia, and then to go on from there. So clearly this affects the EU and needs to be dealt with by the EU and the western Balkans jointly. This cannot be resolved alone by Bosnia or Serbia.”

Bosnia’s two centres for a total of about 200 asylum seekers and illegal migrants long ago reached capacity, leaving hundreds of people from the Middle East, Central Asia and North Africa sleeping outside in Sarajevo and elsewhere.

They arrive from Montenegro having travelled through Turkey, Greece and Albania, and also enter from Serbia, where several thousand people have been stuck since Balkan states officially closed their borders to migrants in March 2016, after a million people crossed the region en route to the heart of the EU the previous year.

In an election year, the issue is becoming another source of political tension in Bosnia, which since a 1992-5 war has been divided into two semi-autonomous regions, the Muslim-Croat federation and Serb-run Republika Srpska.

Leaders of Republika Srpska blame the central government in Sarajevo for the crisis, want the borders to be closed to migrants, and refuse to accommodate any of them in their region.