Anger in Germany after migrants attack police and free deportee 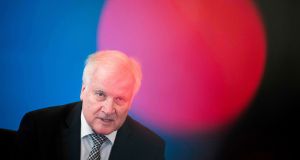 German interior minister Horst Seehofer at a press conference in Berlin on Thursday, at which he owed to speed up the deporting of failed asylum seekers. Photograph: Odd Andersen/AFP/Getty Images

Germany’s interior minister has vowed to speed up the deporting of failed asylum seekers after a group of migrants violently forced the police to release a young African man about to be deported.

Horst Seehofer described the incident this week as “scandalous” and “a slap in the face of the law-abiding population”. He said the perpetrators would meet the full force of the law. The attack made front-page news on Thursday, adding fuel to an already highly contentious debate over how to deal with refugees whose asylum requests have been turned down.

Berlin faces mounting public pressure to toughen its approach towards deportation, especially of young criminals and refugees accused of harbouring extremist views. In a bid to speed up the often drawn-out process, the government of Angela Merkel is planning to set up so-called anchor refugee centres that will house new arrivals. If their asylum bid fails, they would be deported directly from the anchor centre.

“Anchor centres will help us enormously when it comes to bundling and speeding up asylum procedures,” Mr Seehofer told a press conference in Berlin on Thursday. The new system, he added, was also “more humane” because it would provide legal clarity to asylum seekers as soon as possible.

Mr Seehofer, a member of the conservative Christian Social Union from Bavaria, also promised other measures to reduce refugee flows into Germany. He said the surge in asylum seekers during the 2015-2016 Syrian refugee crisis should not be repeated. “Integration can only work if we limit migration,” he said.

More than 1.3 million migrants – mainly from Syria, Afghanistan and sub-Saharan Africa – have arrived in Germany since 2015, sparking significant social and political upheaval.

The migrant influx coincided with the rise of the far-right Alternative für Deutschland, which emerged as the third-biggest party in last year’s general election. The AfD has drawn support from across the political spectrum, but in particular from Dr Merkel’s Christian Democrats and Mr Seehofer’s CSU, which faces a critical election in its home state of Bavaria this year.

The latest controversy surrounding refugee policy was triggered by events in the southern city of Ellwangen on Monday night. Police apprehended a 23-year-old man from Togo who was set to be sent back to Italy, his point of arrival in the EU. They were forced to retreat after coming under attack from 150-200 African migrants who eventually managed to free the deportee.

Police returned to the Ellwangen centre with hundreds of officers on Thursday and managed to apprehend the 23-year-old.

A separate case that caused waves in Germany in recent weeks concerns a Tunisian man who reportedly served as a bodyguard to Osama bin Laden. He now lives in Bochum. German authorities have tried to deport him since 2007 but have repeatedly been blocked from doing so by the courts.

“We have to break through this spiral of court decisions,” Mr Seehofer said on Thursday. – Copyright The Financial Times Limited 2018