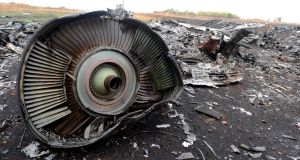 Part of the Malaysia Airlines Flight MH17 at the crash site in the village of Hrabove (Grabovo), some 80km east of Donetsk in Ukraine, in September 2014. Photograph: Alexander Khudoteply/AFP/Getty Images

Australia and the Netherlands have both formally accused Russia of being responsible for the shooting down of Malaysia Airlines Flight MH17 in July 2014, with the loss of 298 lives – in a major escalation of diplomatic tensions between Moscow and the West.

After four years of intense international investigation, including the forensic reconstruction of the fuselage of the Boeing 777 aircraft, the two countries issued a joint statement, following a Dutch cabinet meeting, saying they believed Russia was “directly involved” in the disaster.

That decision, said Dutch foreign minister, Stef Blok, was based on the findings of a five-country joint investigation team (JIT) which reported on Thursday that the Buk missile that destroyed the airliner had been in the hands of a Russian military unit, the 53rd anti-aircraft brigade, at the time.

“On the basis of the JIT conclusions, the Netherlands and Australia are now convinced that Russia is responsible for the deployment of the Buk installation that was used to destroy MH17 over eastern Ukraine’, said Mr Blok.

The two governments, he added, would now take “the next step” at the UN Security Council next week and invite Russia to enter a belated “dialogue” under Resolution 2166, which was adopted unanimously in 2014, obliging members to assist any civil or criminal investigations into the disaster.

Given the tensions between Russia and countries such as Britain, France, Germany, and the US, over the Skripal affair, state-sponsored hacking, and election meddling, the joint statement was carefully choreographed – with Dutch premier Mark Rutte cutting short a visit to India to chair the cabinet.

Within moments of the statement, the EU’s foreign affairs spokeswoman, Federica Mogherini, described the JIT report as “professional and impartial” and said the EU stood behind its analysis that the missile fired “belonged beyond doubt to the armed forces of the Russian Federation”.

Ms Mogherini called on Russia to “accept its responsibility and fully co-operate with all efforts to establish accountability”.

Russia has always denied any involvement in shooting down the jet – which was en route from Amsterdam to Kuala Lumpur – and rejected Thursday’s JIT findings, saying explicitly that “not a single anti-aircraft missile system from Russia has ever crossed the Russian-Ukrainian border”.

On Friday, after Mr Rutte told reporters that Moscow had patently failed to co-operate with the investigation, Russian foreign minister, Sergei Lavrov, told Tass news agency that he had spoken by phone to Mr Blok who had been unable to provide any convincing evidence proving the Russian link.

If Russia rejects the Dutch offer of “dialogue”, then realistically the only remaining state-to-state option is the International Court of Justice in The Hague, the main judicial organ of the United Nations, which settles disputes between member nations.

In terms of criminal liability, the best option is a Dutch court where the accused can be tried in absentia, assuming that the Russian authorities will never agree to extradition.