Europe Letter: EU compromise on asylum seeker rules will be hard to broker 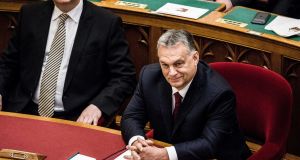 Among the items on an increasingly crowded agenda for EU leaders at their June summit is the fraught saga of how the EU treats asylum seekers, specifically the “Dublin regulation” (named after the Dublin Convention signed in 1990).

This determines responsibility for looking after the migrants once they arrive on our shores – it requires asylum seekers to make their application in the first EU country they arrive in. That country is then responsible for accepting or rejecting their claim, and the seeker may not restart the process in another state.

Most EU states accept that this puts a grossly unfair burden on countries such as Italy and Greece which have seen an influx of millions in recent years. The challenge in reforming “Dublin” is, however, how to regulate that desire for solidarity fairly, and whether it can be used to send mandatory quotas of migrants to each EU state when then the next crisis breaks.

At their December summit leaders asked the Bulgarian presidency to work to come up with a version they could all agree by consensus in June and the latter’s compromise does seem to be garnering critical support. But a consensus is impossible. Hungary, Poland and the Czech Republic, all already in breach of European Court rulings after 2015 ordering them to take EU-mandated relocations, are adamantly opposed to any mandatory quotas.

Newly re-elected Hungarian prime minster Viktor Orban recently unapologetically reiterated to the German daily Bild his objections: the EU’s migration policies threaten the “sovereignty and cultural identity” of Hungary, he said. “We don’t see these people as Muslim refugees. We see them as Muslim invaders ...

“We believe that a large number of Muslims inevitably leads to parallel societies, because Christian and Muslim society will never unite,” Orban told the paper.

On the other side of the argument are the “frontline” receiving states, Italy, Greece, Malta, Cyprus and Spain, determined that solidarity of their fellow Europeans should start earlier.

In a joint position paper they argue, for example, that the Dublin “responsibility” of the member state should not extend beyond two years, instead of the 10 suggested by the Bulgarians. After the two years they say refugees should be allowed to apply for asylum in other member states.

And they are anxious to trigger earlier the new mechanisms which require fellow member states to come to their support, whether with money or technical assistance. Or, crucially, when a migration flow is deemed “extremely severe”, with mandatory relocations to other member states by means of country-specific quota.

This is a complex system which requires agreement on how to define a “normal” state of non-crisis migration, how to delineate the stages of severity which are to trigger different responses, and how the quotas are to be allocated.

The struggle for a consensus is now a political imperative, even if it means diluting the regulation – and so the Bulgarians are reported to be working on yet another compromise

Currently this is by a calculation involving GDP and population size but some of the more reluctant member states want to include a weighting for “capacity to absorb migrants”, a most subjective and unquantifiable measure.

Ireland, in principle, supports the idea of solidarity and mandatory relocations, but has reservations about some of the provisions suggested by the Bulgarian compromise. Because of a treaty opt-out from the Schengen passport-free travel system, Ireland has freedom to choose whether to opt in to Dublin, and, unlike the UK, has done so in the past, accepting its quota of resettlements.

Dublin, the capital not the regulation, would prefer, it is understood, to see the resettlement issue dealt with separately from the attribution of responsibility, and is concerned that the new method of calculating our share of resettlements in difficult times could, in exceptional circumstances, treble our allocation. But Ireland will certainly sign up to whatever is agreed, if it is agreed.

It is looking increasingly certain that unanimity will be impossible to achieve at the summit meeting in June. The temptation then for the European Commission, which supports the Bulgarian compromise, and states such as Germany and Sweden who see the regulations as dysfunctional and are determined to see them reformed, will be to put the package on the agenda for a ministerial meeting in the autumn.

There they could be voted through by “qualified majority”, against the wishes of the Hungarian bloc.

That prospect, however, fills many states with dread – it would provide devastating ammunition for anti-EU forces within those countries, evidence that the EU runs roughshod over national sensitivities.

The struggle for a consensus is now a political imperative, even if it means diluting the regulation – and so the Bulgarians are reported to be working on yet another compromise that would allow states refusing to accept their quota allocations to make a per capita payment for each refugee turned away.

Not a fine – God forbid! – but an alternative way of expressing solidarity with fellow member states in trouble. Hungary is said to be unpersuaded.