For good or ill, September 2015 was the making of Angela Merkel 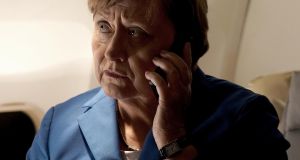 Angela Merkel’s protocol chief promised her a quiet day of speeches and handshaking around Germany on September 4th, 2015. When she returned to her Berlin apartment that evening, Merkel had an uneasy feeling she had just lived through the defining day of her four-term chancellorship. But certainty would only come later – with hindsight.

That day thousands of asylum seekers from Syria, Iraq and Afghanistan stranded in Hungary began walking to Austria, but their goal was Germany. Instead of closing her eyes, and the border, the German chancellor allowed them in.

Merkel insisted at the time that the welcome was to be a one-off show of generosity. Instead it became part of one of the greatest flow of migrants in modern times. Around 1.5 million people arrived in Germany in late 2015 and 2016, matched in relative terms only by numbers in Austria and Sweden.

Even now the refugee crisis continues to be felt in the EU – at its increasingly impenetrable borders, the waters off Greece and Italy and in many member states’ major cities. But why did Merkel decide as she did? And, before history judges her, on what basis did she act?

On Wednesday evening Germans had a chance to make up their own minds with a gripping docudrama on ZDF public television that pieced together the events of that September day and showed the difficulty of judging, and responding to, fast-moving events far away.

The German leader didn’t talk to the filmmakers, instead she was played with often eerie familiarity - watchful eyes, downturned lips, weighty walk - by actor Heike Reichenwallner.

“There are always wise guys who say one should have known more, but always after the fact,” says former interior minister, Thomas de Maizière. “But it’s not so easy to close borders against determined people.”

Many believe it was his ministry that triggered the events leading to September 4th. Under pressure by the media to explain huge backlogs in asylum applications, Germany’s federal interior ministry issued new rules to federal migration authorities which, in turn, made one change public on social media on August 21st .

“At the present time,” a migration office tweet read, “#Dublin-procedures are as far as possible factually not being pursued for Syrian citizens.”

It was intended to clarify the situation for Syrians already in Germany. Once translated into Arabic, however, it was understood very differently in Budapest’s Ostbahnhof train station in Hungary on September 4th.

While Merkel was touring the Bavarian countryside, Mohammad Zatareih, a 25 year-old from Syria, urges people to join him and leave Budapest’s Ostbahnhof train station for what became known as the spontaneous “march of hope”.

Two days previously, a three year-old boy had been washed up dead on a Turkish beach. Eight days earlier, Austrian Autobahn police discovered 71 people asphyxiated in the back of a van.

The film recreates their desperate situation and the uncertain flight from the heavy-handed Hungarian authorities.

“Orban doesn’t want a solution, he wants a problem,” suggests Merkel’s chief of staff grimly, in a dramatised scene. “The Orban principle is to treat them badly so they want to move on.”

From the German perspective, the populist Hungarian leader worked quickly to escalate events: sending buses to collect migrants from the motorway verge and transport them to the Austrian border. Then it was up to the Austrian and German chancellors - in a series of late-night phone calls, dramatised in the docudrama - to react to the trap they felt Orban had set.

But the film pulls no punches in flagging the mistakes of the Merkel administration.

“It was a mistake insisting on European distribution of refugees, that was always practically impossible to implement,” says Gerald Knaus, a migration expert, tells the docudrama. “It was always an illusion: some countries didn’t want them and people didn’t want to go back to those countries (where they’re not wanted).”

German domestic intelligence chief Gerhard Schindler, meanwhile, speaks witheringly of former political bosses, whose priority he felt was to avoid unpleasant images - a stand-off, a riot or worse - at the German border.

As for Merkel, the Berlin sphinx has never spoken in depth about her motivations that day. Some have flagged her upbringing as a pastor’s daughter. The film suggests, amid frantic phone calls and improvised decisions, she was motivated by events a quarter century earlier.

“It’s like ‘89,” she tells her closest adviser in one dramatised scene. Later, dozing in her armoured car, she recalls images of East Germans fleeing into Prague’s West German embassy or across the open Cold War border between Hungary and Austria.

Once she made her decision - with no political cover - it was made. Four years on the decision continues to reverberate, most visibly with the rise of the far-right Alternative für Deutschland - with nearly 28 per cent support in Saxony’s weekend election.

Former cabinet colleagues say, for good or ill, September 4th, 2015 was the making of Angela Merkel.

“Those who say Merkel has no principles,” said ex-foreign minister Sigmar Gabriel, “were taught a lesson.”