Bodies wash up on Libyan shore a month after shipwreck 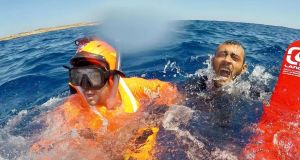 A migrant being rescued at sea after diving from the Open Arms ship off the coast of Lampedusa, southern Italy. Photograph: EPA/Italian Coast Guard

Beside Khoms Souq al Khamis migrant detention centre, in northwest Libya, bodies are washing up on the shore.

It’s been nearly a month since as many as 150 refugees and migrants drowned in a shipwreck off the port city, but detainees there say there are still as many as six corpses at any one time along the beach. They are visible from the detention centre where about 180 people, including 12 of the shipwreck survivors, have been incarcerated.

Using a hidden phone, an Eritrean man who has been in contact with The Irish Times for months said Libyan guards threatened to shoot detainees if they tried to bury the corpses.

He said several detainees had managed to go out to the beach during a toilet break, and sent a video of them digging up sand in an attempt to cover the dead. He believes some of the bodies were later taken away by the Libyan Red Crescent.

Some of the man’s messages came as the United Nations refugee agency special envoy for the Mediterranean, Vincent Cochetel, tweeted his concern at “the radicalisation of the migratory dreams and demands of some migrants and refugees in Libya, and neighbouring countries”.

Mr Cochetel’s tweet, sent on August 18th, was sparked by a development on the Open Arms rescue ship, which had been stranded for weeks in the Mediterranean. The ship, carrying about 100 mostly African migrants, was evacuated this week on the orders of an Italian prosecutor; those on board disembarked on the Sicilian island of Lampedusa.

The ship’s operators, who had been denied permission to dock in Italy, had refused to travel the long distance to Spain.

The UNHCR official’s words were criticised by activists and lawyers working on migration issues.

There are roughly 5,600 refugees and migrants locked up in detention centres across Libya. Most come from countries like Somalia, Eritrea, and Sudan, and have fled wars or dictatorships. The majority tried to cross the Mediterranean Sea to reach Europe at least once, but have been caught by the EU-supported Libyan coastguard, and returned to indefinite detention.

Those who come from what are recognised as “refugee-producing” countries hope for legal evacuation by the UNHCR, but this process is slow and uncertain. In the meantime, those who speak to The Irish Times worry they could die or be sold back to people smugglers.

On July 2nd, at least 53 refugees and migrants were killed in Tajoura detention centre, eastern Tripoli, after an air strike hit one of the halls detainees were being kept in.

In another detention centre, Zintan in northwest Libya, at least 23 detainees have died from poor conditions and a lack of medical care since last September.

The people in Khoms Souq al Khamis say they are desperate for help. Aid workers say the Tripoli-based government no longer has access to detainees, though the detention centre is ostensibly under the control of its Department for Combatting Illegal Migration.

“Could you tell [the public] what you know about Khoms... how hard it is to live here?” messaged the Eritrean refugee. “We are in a critical and dangerous situation, and it’s better if we leave this detention centre. They’re abusing us and even trying to rape women.”

He said aid organisations had stopped visiting, and the guards send a few people out to work each day to raise money to buy food for fellow detainees. “Cleaning toilets, bathtubs, cleaning garbage from roads, and whatever else. [The] working people call it slavery, but there is nothing we can do,” said the Eritrean man.

He said he wanted to send a “short and human rights necessary message to everyone who cares about speechless refugees [in] Libya... The world will not be destroyed by those who do evil, but by those who watch them without doing anything”.