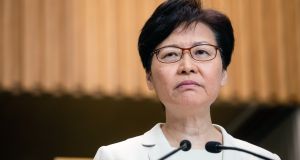 Hong Kong’s embattled leader, Carrie Lam, has vowed to use “stern law enforcement” to stamp out violent protests, a day after she made announced to formally withdraw an extradition Bill that has ignited months of protests.

At a press briefing on Thursday, Ms Lam said the purpose of her decision to formally withdraw the suspended Bill was to “zhibao zhiluan”(“put a stop to violence and chaos”) - a phrase often used by mainland Chinese officials when condemning the protests in Hong Kong.

“To step out of the impasse, the most important thing right now is to stop the violence and to sternly enforce the law,” she said. “If there is still violence going on every day, it will affect the city’s operation and people’s everyday lives.”

Ms Lam announced on Wednesday evening in a televised message that her government would formally withdraw a controversial Bill that would have allowed extraditions to mainland China that has plunged the territory into its biggest political crisis in decades.

In a press conference, Ms Lam was repeatedly questioned on why it took her so long to withdraw the Bill, but she skirted the questions. “It is not exactly correct to describe this as a change of mind,” she said. She added that full withdrawal of the Bill was a decision made by her government with Beijing’s backing. “Throughout the whole process, the Central People’s Government took the position that they understood why we have to do it. They respect my view, and they support me all the way,” said Ms Lam, looking less tense than a televised appearance the day before.

But many ordinary Hong Kong residents and protesters, infuriated by the police’s excessive use of force in the past three months, said what mattered more to them was for the government to investigate police wrongdoing.

Many interviewed by the Guardian have said the escalating police brutality and the government’s hostility towards ordinary people in past months have hurt them deeply and made it hard for them to trust the authorities again. Police have arrested nearly 1,200 people so far.

On Thursday, Ms Lam again rejected protesters’ demands to set up an independent body to investigate police use of force, and said it was impossible to give in to demands for an amnesty for those arrested, saying: “The government cannot do things that are against the rule of law.”

The protests, which started in early June, have morphed into a broader, and increasingly violent, anti-government movement, with animosity between police and protesters reaching boiling point.

Ms Lam’s comments indicate that the government will continue to use hardline measures to deal with protesters, but many protesters vowed to continue demonstrating so long as the government refuses to investigate police’s abuse of power.

Just hours after Wednesday’s Bill withdrawal, dozens shouted slogans and set up makeshift barricades outside a police station in the Mong Kok district demanding Ms Lam meet all of their political demands. On Thursday morning, students from several secondary schools formed human chains outside their schools to protest against recent police brutality.

Ms Lam also refused to step down, reiterating that she had “a sense of responsibility to help Hong Kong to ‘zhibao zhiluan’(“put a stop to violence and chaos”)” and to get back to normal.

Ms Lam however sidestepped a reporter’s question about whether the government would launch an emergency law with sweeping powers if protests did not stop. After Ms Lam’s announcement, a pro-Beijing politician suggested that if protests continued, the authorities should invoke the Emergency Regulations Ordinance, which enables the government to impose draconian measures, including censorship and suppression of publications and communications, to quell unrest.

The withdrawal, which marks a u-turn after months of vows not to back down to the protesters, comes less than a month before China celebrates its national, day on October 1st, the 70th anniversary of the founding of the People’s Republic of China.–Guardian and Reuters