Refugees defiant in face of UN order to return to Tripoli 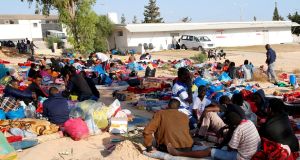 Migrants and their belongings after July 2rd attack on a detention centre near Tripoli. Photograph: Ismail Zitouny

It was a walk of courage and determination. Days after a migrant detention centre bombing in eastern Tripoli on July 2nd, hundreds of survivors walked out in protest at their treatment, seizing a rare moment of opportunity as Libyan guards and staff from the United Nations Refugee Agency watched on.

The devastating air strike on the Tajoura detention centre was carried out by the self-styled Libyan National Army, which is fighting to seize control of the Libyan capital from the UN-backed Government of National Accord.

At least 53 refugees and migrants were killed; surviving detainees told The Irish Times they helped collect body parts in the aftermath. Some accused the Tripoli-based government of using them as human shields, by locking up thousands of detainees directly beside weapons stores in multiple detention centres.

Tens of thousands of refugees and migrants have been incarcerated in Libya after trying to cross the Mediterranean Sea to Europe. Some of the bombing survivors hadn’t left the Tajoura centre in two years. Their eyes strained in the sunlight and their limbs were weak, yet they marched tens of kilometres last week until they reached a centre run by the UNHCR, where they were admitted, believing they had finally reached safety.

On Sunday, the UNHCR ordered them to leave the centre, saying they would not be helped there and must return to Tripoli’s streets. Survivors say they are terrified and worry they are at risk of being detained by the authorities again, or being kidnapped by smugglers.

“Most of the people are demoralised because we have seen air strikes, killing and so many tortures,” one man told The Irish Times through social media messages.

He said he would try to cross the Mediterranean again. “The only choice is to go to the sea, because living in the city is the same as sinking in the sea. Most of the people already plan to try the sea.”

“No one wants to leave the place,” said another man, from Sudan, who rejected an offer of cash from UNHCR in exchange for leaving. “They are playing with our lives. We deserve to live like anyone else on this planet. I told her I don’t need your cash, take me to a safe place, I can make my own money. This time I will make it or die in the sea.”

“We are fully supportive of the Tajoura survivors and we do want to find solutions for each one of them,” she said.

However, The Irish Times obtained a video showing a UNHCR staff member telling refugees that Libyan authorities would take them back to detention centres if they didn’t agree to leave.

This row comes as both EU migration commissioner Dimitris Avramopoulos and the UN call for more countries to offer resettlement spaces for refugees in Libya. This year, an estimated 2,600 people will be evacuated or resettled from the country, according to UNHCR – a small percentage of those asking for it.

“Slots for resettlement and evacuation out of Libya are a lifeline and at present not enough to support all persons in need,” the agency said in a statement on Monday.

All the survivors of the Tajoura detention centre bombing who have spoken to The Irish Times come from countries with wars or dictatorships, including Sudan and Eritrea. They say they can’t return home and need a way out. “I’m afraid to go outside,” one man said.

1 Man who loses bag with €40,000 of cocaine rings gardaí to report it missing
2 Father unaware partner and baby dead until gardaí called to raise alarm
3 US presidential debate: who won, was it any good, were there any surprises?
4 Two hundred Irish retailers for all your online Christmas shopping
5 Irish far right groups trying to disrupt key State institutions, says Garda Commissioner
Real news has value SUBSCRIBE