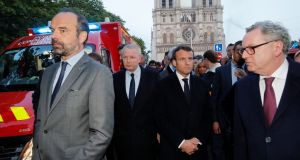 Emmanuel Macron, centre, near Notre Dame cathedral last Monday. That afternoon, the president had recorded an address to the nation, which was to have been broadcast at 8pm. Photograph: Philippe Wojazer/AFP/Getty Images

Macron had spent three months conducting a “great national debate” to bring France out of the gilets jaunes crisis, named after the yellow-vested protesters who will demonstrate for the 23rd consecutive on Saturday.

On Monday afternoon, Macron recorded a 26-minute address to the nation, which was to have been broadcast at 8pm. He envisaged the speech as a turning point in his presidency, as nothing less than a “refoundation” of the French republic.

“All chapters of our national life are concerned,” Macron said in the recording, according to leaks that subsequently appeared in French newspapers. “If France does not carry, on behalf of its citizens and their families, and in the face of the world, this great project of resistance against the inevitability of the law of the jungle, no one will.”

When he learned of the fire, Macron cancelled the broadcast and rushed to the scene of the conflagration. At 8.05pm, he tweeted instead: “Notre Dame de Paris is in flames. Emotion of the whole nation... like all our compatriots, I am sad this evening to see a part of us burning.”

Macron postponed a scheduled press conference until April 25th, and dedicated the entire week to the “emotion of the nation”, shifting from the role of a providential leader offering a way out of social crisis to that of a compassionate father figure.

“I will come back to you, as I had promised, in coming days, so that we can act together following our great debate, but today is not the time,” Macron said in a speech focused solely on rebuilding the cathedral, on Tuesday night. He spent the rest of the week chairing meetings about the cathedral, appointing the army general and former chief of staff Jean-Louis Georgelin to oversee the massive reconstruction project, and honouring the 400 firemen who saved the monument’s outer shell.

There are unconfirmed reports that Macron, whose closeness to the Catholic church worries some secularists, will attend religious services over Easter weekend.

By Tuesday, attention will turn to unfinished business. The main question is whether the president can conclude the gilets jaunes and great debate episode in a way that prevents it dominating the campaign for the May 26th European Parliament elections.

The gilets jaunes have not gone away. Interior minister Christophe Castaner warned on Friday that anarchist black blocs were plotting further violence in Paris on Saturday. Social media organisers are calling it “Ultimatum 2”. Rioters sacked much of the Champs-Élysées during the previous “Ultimatum” on March 16th.

Opinion polls show a majority of French people believe the gilets jaunes should stop their protests because of the fire at Notre Dame. But the protesters are plotting far ahead, envisaging demonstrations against the G7 summit in Biarritz at the end of August.

Macron was reportedly annoyed that his aborted speech was leaked by Agence France Presse and other media. During the hiatus imposed by the fire, he told cabinet ministers he was still open to proposals for a completely new speech, which he is expected to deliver next week.

The main proposals, which are unlikely to change, are the re-indexation of the lowest pensions, under €2,000 per month; lower income tax for low wage earners; a total moratorium on school and hospital closures for the remainder of Macron’s term; the use of referendums to decide local issues, and more flexible rules for organising national referendums.

Macron committed to spending €10 billion in December, in the hope of defusing the gilets jaunes crisis. The pension move alone will cost another €1.4 billion.

In a poll published by Odoxa-Dentsu Consulting on Thursday night, 61 per cent of respondents approved Macron’s decision to postpone his speech out of respect for Notre Dame. All of the above-listed measures were popular, with 77 per cent approving the reduction of the tax rate on low incomes from 14 per cent to 5 or 10 per cent, and similarly high percentages supporting Macron’s plans for pensions, schools and hospitals.

In an apparent attempt to appease populist hatred of “technocrats” and the “elite”, Macron promised to do away with the École Nationale d’Administration, of which he is a graduate. The training ground for top civil servants is often compared to the Ivy League or Oxbridge. “We won’t move things forward by making scapegoats of the ENA and civil servants,” said Daniel Keller, the president of ENA alumni.

Macron still refuses to re-establish the wealth tax. According to the Cabinet Roland Berger, the consultancy firm responsible for analysing hundreds of thousands of contributions online and in books of grievances set up in town halls, the return of the tax was a leading demand of citizens engaged in the debate.