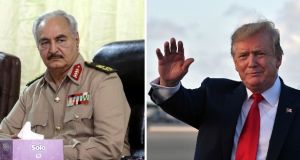 The UN has warned that international rivalries and support for competing Libyan factions has helped push the oil-rich north African state to the brink of full-blown war.

Since Khalifa Haftar – who is backed by Egypt, the United Arab Emirates, Saudi Arabia, Russia and France – launched an offensive on Tripoli, the UN has received reports that military equipment, including aircraft and rocket launchers entering the country.

“There are indications that material is pouring in for both sides and that is a serious escalation,” said Stephanie Williams, the deputy head of the UN mission to Libya. “This has to stop because broadening the conflict is going to be catastrophic. This is a city of three million people.”

Gen Haftar, who heads the self-styled Libyan National Army (LNA), launched his offensive on Tripoli, where the UN-backed government of National Accord is based, this month. The assault on the capital came ahead of a UN-organised conference intended to lead to elections and has shattered hopes of a political solution to end years of chaos and violence in the Opec member.

Western and regional powers – including Gen Haftar’s backers – have called for a “de-escalation” of the fighting. But they have been careful not to single out the LNA. Diplomats and analysts say Gen Haftar’s foreign allies, inadvertently or deliberately, emboldened the veteran soldier to launch his offensive capital with their tacit support.

It emerged on Friday that Gen Haftar had spoken last Monday to US presdient Donald Trump.

The White House said in a statement that the two men had discussed “ongoing counterterrorism efforts and the need to achieve peace and stability in Libya.” The statement said Mr Trump recognised Gen Haftar’s “significant role in fighting terrorism and securing Libya’s oil resources, and the two discussed a shared vision for Libya’s transition to a stable, democratic political system”.

It was unclear why the White House waited several days to announce the phone call.

Libya has been plagued by instability since a popular uprising toppled Muammer Gadafy in 2011, with rival authorities and myriad militias carving the nation into fiefdoms. For two years, Gen Haftar, whose forces control the east, was courted by leaders in Paris, Rome, Moscow, Abu Dhabi and Riyadh.

UN reports have previously named the UAE and Egypt as being among countries that violated an arms embargo. Russia has bankrolled Gen Haftar by printing Libyan dinars, and there have been reports of Russian mercenaries working with the LNA.

Ostensibly, the diplomatic courtship of Gen Haftar had three goals: supporting the warlord’s campaign against Islamist extremism, countering human trafficking and securing a political agreement between him and his rivals.

Yet Gen Haftar made no secret of his ultimate goal – to seize Tripoli and control the country.

When he advanced into the lawless south in February and took over Libya’s biggest oilfield, Sharara, his allies supported the move. France said Gen Haftar’s operation had “eliminated terrorist targets” and was a way to “durably hinder the activities of human traffickers”.

Diplomats say the ease of that advance may have convinced Gen Haftar that the time was ripe to move west on Tripoli.

“My sense is his traditional foreign partners didn’t approve any plan to go into Tripoli and were probably unhappy. But now he's here, and particularly if he’s faltering, they are likely to want to double-down,” said a western diplomat.

Regional power struggles are also playing out as the UAE’s and Saudi Arabia’s rivals, Turkey and Qatar, back Islamist groups aligned to the Tripoli-based government. Egypt has been using the LNA to secure its borders with eastern Libya, and analysts say Cairo is probably worried that the Tripoli offensive will overstretch Gen Haftar’s forces and triggering further chaos.

The offensive has also thrust differences between France and Italy over Libya policy back to the surface. Rome staunchly backs the Tripoli government and views Gen Haftar as an autocratic, destabilising barrier to peace.

Disagreements have been exacerbated by strained relations between French president Emmanuel Macron and Matteo Salvini, Italy’s interior minister. Mr Salvini recently said it would be “very serious if France, for economic or commercial reasons, had blocked an EU initiative to bring peace to Libya”.

A senior French official told the Financial Times that Gen Haftar’s offensive came as a “surprise” to Paris, which urged him to pursue a political, not military, process.

French officials, including Mr Macron, have spoken to Gen Haftar, who denied he was seeking a “military solution”. But he also “seemed to be very determined to move forward,” the French official said.

The LNA’s offensive has stalled on the edge of Tripoli, with neither side willing to back down. On Thursday, the World Health Organisation said 205 people had died in this month’s fighting.

“When you look closely, you see the regional and international players have only been paying lip service to the UN efforts. Many see the status quo as beneficial for them,” said Mohamed Eljarh, chief executive of the Libya Outlook for Research and Consultancy, based in the east of the country. “The international community should be part of the solution, but it has been part of the problem.” – Copyright The Financial Times Limited 2019/Additional reporting: Reuters