Joe Biden set to announce run for White House in 2020 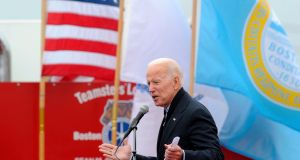 Former US vice-president Joe Biden at a rally organised by the United Food and Commercial Workers Union to support Stop and Shop employees on strike in Dorchester, Massachusetts. Photograph: Getty

Former US vice-president Joe Biden plans to make a widely expected announcement of his candidacy for the presidency in a video on Wednesday, the Atlantic magazine reported on Friday, citing sources close to Mr Biden’s top aides.

The announcement will follow months of speculation over whether Mr Biden would launch a bid for his party’s nomination to challenge President Donald Trump in 2020. The former vice-president is a Democratic party stalwart and an early leader in opinion polls.

The announcement video will include footage shot two weeks ago outside the house where Mr Biden grew up in Scranton, Pennsylvania, the Atlantic reported. Biden’s roots in the faded industrial town of about 77,000 people have fueled his appeal among US working class voters.

He served 36 years in the US Senate representing Delaware and eight years as vice-president under former president Barack Obama. At 76, he will become the second oldest candidate in the Democratic primary after Senator Bernie Sanders, who is 77.

His announcement would bring the field of Democratic presidential hopefuls to 19. Political observers in recent weeks have wondered if Mr Biden delayed his decision due to recent allegations from women that he made them feel uncomfortable when he touched them at political events in the past.

He responded to the allegations earlier this month by saying he believed he never acted inappropriately during his many years in public life.

In the days after four women came forward with allegations. Sources close to Mr Biden said that campaign preparations had not been slowed by the controversy.