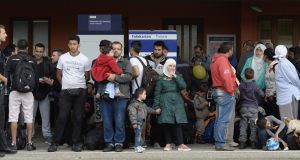 Refugees wait for a special train in Freilassing, southern Germany, in September 2015 after they were taken off express trains from Hungary and Austria. Photograph: Christof Stache/AFP/Getty Images

The German federal police officers, in black protective vests, are waiting on the platform of Flensburg’s redbrick expressionist station when the train glides in.

Three years ago they were here in Germany’s northernmost city to co-ordinate and control the flows of migrants heading to the Danish border – 10km to the north – or on to Sweden. Now the police are back, as are the refugees – this time heading south.

“It’s very political,” says one police officer, a cautious reference to the high-stakes stand-off in Berlin.

On Sunday chancellor Angela Merkel’s Bavarian allies will decide whether agreements she struck in Brussels early on Friday morning are adequate to avoid their threatened national border closures – and risk collapsing the government.

Here in Germany’s northernmost tip, however, few are impressed by more political promises of cross-border co-operation that don’t always translate to the border regions.

Another Flensburg police officer, who’d rather than not be named, says they sometimes get a call from the Danish colleagues to say there are illegal immigrants coming their way – but often not.

Germany’s federal police see a “considerable” rise in people detained on the Danish border without relevant travel documents, up by more than a fifth to 3,500 last year.

Last weekend, police in Flensburg picked up 20 people from Afghanistan, Iraq, Somalia, Yemen and Belarus, women and men aged from 40 years down to just seven months.

The real number of illegal crossings of Germany’s northern border likely to be much higher because, unlike the Bavarian-Austrian border 1,000km to the south, German police here only carry out spot checks on the roads, train and bus stations.

Local officials say the largest group of people showing up in Flensburg are people whose asylum applications in Denmark and Sweden, filed in 2015 and 2016, have now been refused.

Pressure from the public and far-right parties have seen Nordic countries tighten their asylum regimes. Sweden tightened up controls on the cross-brorder Øresund Bridge to Denmark in 2015 and, ahead of elections in September, failed asylum seekers are required to leave the country immediately.

Denmark has stepped up its border controls with Germany and the Copenhagen government, also influenced by far-right parties, has cut welfare for asylum seekers. With less attractive prospects up north, people are once again voting with their feet and police in Flensburg fear a second refugee wave is under way. While they watch and wait, Flensburg police are keeping well stocked their depot of clothes, food, drinks and nappies.

With an eye on developments up north, Austria’s far-right interior minister Herbert Kickl staged a show of force on its border with Slovenia on Tuesday.

Accompanied by tanks and helicopters, the so-called Pro Borders exercise saw officers from a new “Puma” force face down 100 “asylum seekers”, played by police academy students shouting “Let us in!”

Kickl’s priority, he said, was to avoid a repeat of autumn 2015. “A state that cannot protect its borders when it counts loses its credibility,” he said at the Spielfeld border crossing where, in autumn 2015, about 190,000 people walked into Austria from Slovenia.

Though just 20 people have been turned back here in recent months, Mr Kickl insisted his exercise was about preparedness, not propaganda.

Austria assumes the rotating European Union presidency on Monday and will play a key role in implementing the EU agreement, including the aspiration to accept back asylum applicants. But Kickl, from the ruling far-right Freedom Party, has already ruled out migrant returns from its larger neighbour.

“If they are in Germany already they will stay in Germany,” said Mr Kickl to Austrian television. “There is no reason for us to take back these people.”

Merkel’s Bavarian allies, the Christian Social Union (CSU), meet on Sunday to decide if the EU agreement is enough to appease them – and their voters.

Volker Ullrich, CSU legal affairs spokesman in the Bundestag parliament, called the Brussels paper an “encouraging signal” that “may be the basis of compromise” with Merkel’s Christian Democratic Union.

His CSU Bundestag colleague Hans Michelbach, with an eye on places such as Flensburg and Bavaria’s 800km green line to Austria, added: “The question now is what this means for the national border and the acceptance of refugees in the coming months.”