Britain tolerated torture and helped US with renditions after 9/11 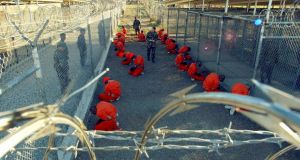 It was “beyond doubt” that British intelligence agencies knew that the US was torturing detainees at an early stage in the so-called “war on terror”, the intelligence and security committee said. Photograph: Reuters

British intelligence agencies tolerated torture and paid for the kidnapping of detainees after 9/11, according to a parliamentary committee report which said MI5 and MI6 knew of activities which were “plainly unlawful”.

The intelligence and security committee (ISC) said it was “beyond doubt” that British intelligence agencies knew that the United States was torturing detainees at an early stage in the so-called “war on terror” but in 232 cases they continued to supply questions after they knew or suspected mistreatment.

“We have found 13 incidents where UK personnel witnessed at first hand a detainee being mistreated by others, 25 where UK personnel were told by detainees that they had been mistreated by others and 128 incidents recorded where agency officers were told by foreign liaison services about instances of mistreatment. In some cases, these were correctly investigated but this was not consistent,” the report said.

In at least three cases, Britain offered to pay for the rendition of detainees and in a further 22 cases, MI6 or MI5 intelligence helped to enable a rendition operation. The committee did not find evidence of British intelligence personnel directly torturing detainees but said those at headquarters of London were aware that the US was mistreating detainees.

“That the US, and others, were mistreating detainees is beyond doubt, as is the fact that the agencies and defence intelligence were aware of this at an early point,” the report said.

“The same is true of rendition: there was no attempt to identify the risks involved and formulate the UK’s response. There was no understanding in HMG of rendition and no clear policy – or even recognition of the need for one.”

The committee started its investigation after plans for an independent judge-led inquiry collapsed but Theresa May’s government did not allow the MPs and peers to interview intelligence officers who were involved at the time. The report follows a British government apology to Abdul Hakim Belhaj and his wife, who were abducted and taken to Libya after a tip-off from MI6.

Ms May said on Thursday that the lessons of what happened in the aftermath of 9/11 had led to improved operational policy and practice for the intelligence agencies, better guidance and training, and an enhanced oversight and legal framework.

“With the benefit of hindsight, it is clear that UK personnel were working within a new and challenging operating environment for which, in some cases, they were not prepared,” she said.

“It took too long to recognise that guidance and training for staff was inadequate, and too long to understand fully and take appropriate action on the risks arising from our engagement with international partners on detainee issues. The agencies responded to what they thought were isolated allegations and incidents of mistreatment, but the ISC concludes that they should have realised the extent to which others were using unacceptable practices as part of a systematic programme. The agencies acknowledge that they did not fully understand this quickly enough and they regret not doing so.”