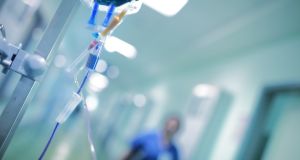 Last year, instances of euthanasia fell by seven per cent in the Netherlands. There is “anxiety” among medics, says a clinic’s director. Photograph: iStock

He’s almost forgotten now. But in his day, Huib Drion, supreme court judge, law professor, essayist, grandee of the Royal Academy, was undoubtedly the most controversial academic in the Netherlands. Why? For proposing a free “suicide pill” for the over-70s.

Drion died in his sleep at home in Leiden in 2004, aged 86. But his compelling book, Het Zelfgewilde Einde Van Oudere Mensen – which translates roughly as A Self-determined End for Older People – had a huge influence on the debate that led the Dutch to legalise euthanasia in 2002.

Drion wrote the book after one of those everyday encounters with mortality: an elderly – and perfectly lucid, as she apparently pointed out – family member expressing her abject horror at the prospect of having to end her declining days in a nursing home.

There had been a number of controversial legal cases, particularly the Postma case in 1973 where a doctor was prosecuted, and the courts had already essentially taken the humanistic view that no doctor could be required to keep a dying patient alive contrary to that patient’s will.

Drion, however, advocated going much further. He said a pill to end their lives should be available free of charge, on a doctor’s proscription, to anyone over 70 and incurably ill.

“It appears to me,” he wrote, “that many older people would find great reassurance if they could have a means to end their lives in an acceptable way at the moment that to them . . . appears suitable”.

It was quickly sensationalised as “a suicide pill” – and became known as “Drion’s Pill”, his legacy.

He even suggested a two-part failsafe: patients who opted for euthanasia should be given a combination of two tablets to be taken with an interval between them – allowing them enough time to change their minds in between, if necessary.

Contrary to what one sometimes reads outside the Netherlands, euthanasia here is tightly controlled. It is available only where a patient’s condition is terminal and the suffering deemed “unbearable and hopeless”. That decision must be signed off by two independent doctors.

Two things, however, launched it back to the top of the social agenda recently. The first was a government campaign urging people to “think more” about the end of their lives, including being aware of so-called “advanced care directives”, such as “do not resuscitate” orders and euthanasia.

Then last week came an announcement from prime minister Mark Rutte’s centre-left junior coalition partners, D66, that they plan to introduce draft legislation early next year to provide assisted suicide for elderly people “who consider their life is at an end” or, put more positively, that their lives “have been completed”.

Criticising health minister Hugo de Jonge for not tackling the issue urgently enough, D66 MP Pia Dijkstra opined: “The very elderly who have had enough should be able to die when they choose.”

The only glaring question that nobody appears to be answering – or even asking – about such potentially momentous social change is: why?

Euthanasia is already legal. It is a difficult option. It will never be uncontroversial, but it is available. And that, in the opinion of the Dutch public, is a good thing.

But just because it is available in terminal cases involving unbearable suffering does not mean it must equally be a legitimate answer for elderly people who are “tired of life” or feel their lives are complete. These two situations are being casually conflated, but are patently not the same.

If a society wishes to allow citizens to “switch off” when the time comes, without having a medical imperative, that requires deep consideration and debate – not just the modification of existing legislation drawn up in its day to deal with the hard cases that ill health inevitably generates as a grey population turns white.

It is perhaps this slightly childlike attitude – exemplified in Dijkstra’s comment that “we are the first in the world to table such a ‘completed life’ proposal” – which is making more and more doctors wary, and many unwilling to get involved.

Last year, instances of euthanasia actually fell by seven per cent, while the numbers referred to a specialist end-of-life clinic for patients whose doctors will not perform the procedure has risen by 15 per cent so far this year. There is “anxiety” among medics, says the clinic’s director.

This is bad news. Huib Drion was right: euthanasia is an important safety value for those who are sick, in pain, and desperate. It is far too important to be tinkered with, particularly for political gain.