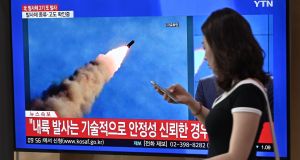 A woman walks past a television news screen showing file footage of a North Korean missile launch, at a railway station in Seoul on Tuesday. Photograph: Getty Images

The launches came hours after the North offered to resume nuclear diplomacy with the United States but warned its dealings with Washington may end without new US proposals.

The North’s projectile launches and demand for new proposals were apparently aimed at pressuring the US to make concessions when the talks restart.

North Korea is widely believed to want the US to provide it with security guarantees and extensive relief from US-led sanctions in return for limited denuclearisation steps.

The North Korean projectiles fired from its South Phyongan province, which surrounds its capital city of Pyongyang, flew across the country and in the direction of the waters off its east coast, according to South Korea’s Joint Chiefs of Staff and Defence Ministry.

Tuesday’s launches were the eighth such launches since late July and the first since August 24th. The previous seven launches have revealed short-range missile and rocket artillery systems that experts say would potentially expand its capabilities to strike targets throughout South Korea, including US military bases there.

On Monday night, the North’s first vice foreign minister, Choe Son Hui, said the country is willing to resume nuclear diplomacy with the US in late September but that Washington must come to the negotiating table with acceptable new proposals. She said if the proposals do not satisfy North Korea, dealings between the two countries may come to an end.

“We’ll see what happens,” Mr Trump said. “In the meantime, we have our hostages back, we’re getting the remains of our great heroes back and we’ve had no nuclear testing for a long time.”

There was no immediate comment from the White House following reports of the launches.

In the late-night statement carried by state media, Ms Choe said North Korea is willing to sit down with the US “for comprehensive discussions in late September of the issues we have so far taken up, at a time and place to be agreed”.