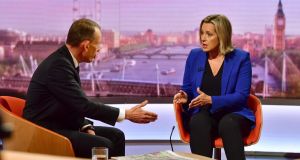 Amber Rudd, who has resigned as work and pensions secretary in protest at the government’s approach to Brexit, appearing on the BBC current affairs programme The Andrew Marr Show on Sunday. Photograph: Jeff Overs/BBC/PA Wire

Boris Johnson will “test to the limit” a law requiring him to delay Brexit rather than leave the EU without a deal, with a possible supreme court challenge. Foreign secretary Dominic Raab said the government would behave lawfully but said the law would be challenged in the courts.

“We are going to deal with that legislation and test it very carefully, what it does and doesn’t require, and that is not only the lawful thing to do but I think it’s the responsible thing to do,” he told Sophy Ridge on Sky News.

Mr Raab was speaking after Amber Rudd resigned as work and pensions secretary and from the Conservative whip in protest against the government’s approach to Brexit and the expulsion of 21 MPs last week. Ms Rudd criticised the way Mr Johnson is running the government, cutting the cabinet out of important decisions.

Ms Rudd said that although the prime minister claims he is seeking a deal with the EU, most of the government’s energy is going into preparing to leave without a deal.

Where is all the work that needs to be done to try and come up with alternative arrangements?

“Where is all the work that needs to be done to try and come up with alternative arrangements, to show where the landing place is, all that work that needs to go behind it? Instead we’re just hearing, ‘we are going to get a deal,’ but there’s very little evidence of it.”

Ms Rudd said she was resigning the Conservative whip in solidarity with the 21 MPs expelled last week for voting to prevent Mr Johnson leaving the EU without a deal. She said she would stand as an Independent at the next election if necessary but expressed the hope that she and the other rebels would be readmitted to the party before then.

“I know I couldn’t carry on in the Conservative Party at such a high level and see 21 of my colleagues, who are good, moderate people who also want a deal, excluded from it. I just needed to move and stand by them,” she said.

A number of other cabinet ministers, including Northern Ireland secretary Julian Smith, are rumoured to be on the verge of resigning. Justice secretary Robert Buckland said he was not resigning but suggested he would do so if Mr Johnson sought to defy the law by refusing to seek an article 50 extension.

“I fully support the prime minister and will continue to serve in his cabinet. We have spoken over the past 24 hours regarding the importance of the rule of law, which I as Lord Chancellor have taken an oath to uphold,” he said.

Business secretary Andrea Leadsom said on Sunday that the Conservatives will breach convention by standing a candidate against speaker John Bercow at the next general election. She said the speaker was no longer fulfilling his role as “a politically impartial, independent umpire of proceedings” in the House of Commons.