Hurricane strikes Canadian territory close to city of Halifax and leaves 380,000 in the dark 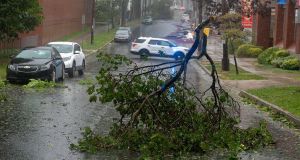 The storm that has already walloped the Virgin Islands, Bahamas and North Carolina brought hurricane-force winds on Sunday to far-eastern Canada, knocking out power to hundreds of thousands of people.

Dorian hit near the city of Halifax, ripping roofs off apartment buildings, toppling a huge construction crane and uprooting trees.

There were no reported deaths in Canada, though the storm was blamed for at least 49 to date elsewhere along its path.

The US National Hurricane Centre said the post-tropical cyclone was centred about 89km (55 miles) east-northeast of thinly populated Anticosti Island on Sunday morning and had top sustained winds of 128km/h (80mph).

It was heading to the north-northwest, roughly up the St Lawrence River.

Nova Scotia officials asked people in the province to stay off the roads so crews could safely remove trees and debris and restore power.

The government said that up to 700 Canadian military personnel will be fanning out across the Maritimes to help restore electricity, clear roads and evacuate residents in flooded areas.

Nova Scotia Power reported 380,000 customers were in the dark.

As the storm ploughed into Prince Edward Island, about 50,000 homes and businesses were soon without power, as were another 74,000 in New Brunswick.

By far the greatest devastation caused by the storm was in the Bahamas, where Dorian struck a week ago as a category five hurricane with 298km/h (185mph) winds, and then hovered just offshore for more than 36 hours, obliterating thousands of homes. The death toll so far on the Bahamas is 43 but casualties are expected to run much higher as the search and recovery operation gathers pace.

Aircraft, cruise ships and yachts were evacuating people from the Abaco Islands and officials were trying to reach areas still isolated by flooding and debris.

The country’s National Emergency Management Agency said it was sending in extra staff because operations had been hampered by the storm’s impact on local workers.

The agency said it was setting up shelters or temporary housing for the newly homeless across the islands and appealed for Bahamians to take in storm victims.

By Sunday, a week after one of the strongest Caribbean hurricanes on record ploughed into the archipelago nation of 400,000 people, the capital city faced a wave of thousands of evacuees fleeing hard-hit areas including Marsh Harbour in the Abacos, where some 90 per cent of the infrastructure is damaged or destroyed.

Great Abaco is littered with mounds of unused construction materials, waterlogged notebooks and Bibles, stained piles of tattered clothes, single shoes, overturned bath tubs and rotting mattresses.Bahamian officials are still pulling bodies from the wreckage across the island and acknowledge that the current official death toll of 43 is likely to rise markedly. Some 70,000 people in need of food and shelter, according to the United Nations’ World Food Programme’s estimate.

Survivors avoided death, but have lost homes, jobs and hospitals. “Home is more than four walls and a roof – it’s the neighbourhood where people live, their friends and neighbours, their livelihoods, comfort, and security for the future. Losing all these things at once is heartbreaking,” said Jenelle Eli, a spokeswoman for the Red Cross, which is helping with the relief.

“People are concerned about their next step, but also how they’ll earn an income and what their lives will look like in the future.”

Bahamian officials acknowledged that Nassau will strain to house all the people that need shelter.

International aid was also pouring into the island nation. The US coast guard and navy were shipping in relief supplies and the US Agency for International Development said it was allocating $2.8 million and had moved enough emergency supplies for 44,000 people to the islands. The American Red Cross said it had committed an initial $2 million to help the Bahamas recover from the hurricane, with food, water and shelter and other necessities. Norwegian energy company Equinor said on Sunday it will clean up an onshore oil spill discovered this week at its Bahamas storage terminal in the aftermath of Hurricane Dorian.

Many in hard-hit Marsh Harbour on Great Abaco complained that aid had been too slow in arriving.

Dorian was also blamed for five deaths in the US southeast and one in Puerto Rico.

Insured losses from Hurricane Dorian are expected to total several billions of dollars, German reinsurer Munich Re said on Sunday.

Board member Torsten Jeworrek, speaking at an industry conference, said the estimate was a “rough guess” as damage was still to be tallied. – AP/Reuters