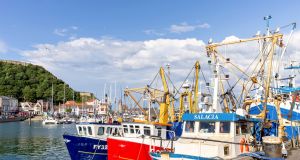 Serious differences remain between the two sides over the most contentious issues of how to share fish stocks, how to arbitrate any future disagreements, and how to ensure fair competition between companies. Photograph: iStock

Britain is seeking to strip European Union fishermen of 80 per cent of the fish quota they currently catch in waters that fall under its exclusive economic zone after January 1st, sources close to the negotiations have told the Irish Times.

It comes as negotiations intensify, with time running out to avoid a damaging no-deal exit in just a few weeks’ time that would be expected to devastate Irish exporters and fishing communities that rely on traditional grounds that fall under British control.

The proposal would gut the EU’s current haul of fish from British waters to roughly €130 million from €650 million, with the potential to devastate coastal communities in several member states.

“The Brits want to get back 80 per cent of the quota,” a source close to the negotiations said.

Intense work is going on behind the scenes to break a deadlock in the negotiations as the EU team headed by Michel Barnier travels to London to resume talks after a week stuck in quarantine due to a positive Covid-19 case.

Serious differences remain between the two sides over the most contentious issues of how to share fish stocks, how to arbitrate any future disagreements, and how to ensure fair competition between companies, three stumbling blocks that have long prevented a breakthrough.

“Fish is still the main obstacle, but also governance is unsolved,” a second source close to the talks said.

With stark differences between the two sides, there was said to have been “no movement” in the talks and “repetition of the same issues for weeks now”.

A suggestion that the EU could offer to give up between 15-18 per cent of the fishing quota EU boats are currently allocated was scoffed at as deeply unrealistic by British sources.

EU boats catch roughly €650 million in fish from the UK’s economic zone, roughly five times the amount in value that British boats catch in EU waters, and London insists that any deal on fisheries will have to recognise the reality of the UK as an “independent coastal state”.

Talks have long been stuck over the contentious issues of how to ensure fair competition between UK and EU companies, how to arbitrate future disputes on the deal, and how to divide fishing rights in waters that EU boats have been sharing but that fall under Britain’s economic area.

Any deal on fisheries is likely to fall unevenly on different member states, with much depending on what kind of stocks Britain allows EU boats to continue to fish.

His UK counterpart David Frost said that a deal was “still possible”, but only if the EU agreed to something that would allow Britain to have an autonomous state aid system and control its fishing waters.

“Some people are asking me why we are still talking. My answer is that it’s my job to do my utmost to see if the conditions for a deal exist. It is late, but a deal is still possible, and I will continue to talk until it’s clear that it isn’t,” Mr Frost said.

“But for a deal to be possible it must fully respect UK sovereignty. That is not just a word – it has practical consequences. That includes: controlling our borders; deciding ourselves on a robust and principled subsidy control system; and controlling our fishing waters.

“We look to reach an agreement on this basis, allowing the new beginning to our relationship with the EU which, for our part, we have always wanted. We will continue to work hard to get it - because an agreement on any other basis is not possible.”

EU officials are increasingly concerned that it may be unfeasible to ratify and implement any deal that can be reached, as the time considered to be the “last moment” to strike a deal passed weeks ago. Pressure for clarity is rising from business groups.

The Irish Government has warned that discussions on the stumbling blocks standing in the way of a deal are “very, very difficult”, while earlier this week European Commission president Ursula von der Leyen said it was unclear whether one could be reached.

“The next phase is going to be decisive. The European Union is well prepared for a no-deal scenario but of course we prefer to have an agreement,” Ursula von der Leyen told the European Parliament on Wednesday.

The EU side believes that prime minister Boris Johnson must make a decision to move in order for a deal to be reached. The bloc has also warned that a deal cannot be reached if the London government persists with contested clauses of its Internal Markets Bill, which override parts of the Withdrawal Agreement struck last year that were designed to avoid a hard border on the island of Ireland.

Any deal must be ratified by Westminster and the European Parliament, where MEPs are concerned that the timetable is becoming difficult for the agreement to be translated into EU languages, scrutinised and voted on by the end of the year.

If no trade deal can be struck, tariffs will automatically come into force on trade between the UK and EU, including punishing levies on vital Irish industries such as beef and dairy. The legal basis for many aspects of the economic relations between the EU and its former member will dissolve overnight, something expected to cause significant damage and disruption.

Even if a deal can be found, customs declarations will be required on trade between the UK and EU and there will be checks on goods travelling from Britain to Northern Ireland. Governments have warned companies to check their supply chains and familiarity with customs to ensure they are prepared.