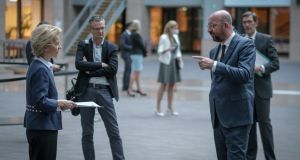 Weeks of further talks are expected to try to bridge differences among European Union member states over how to fund the bloc’s budget and a recovery plan to counter the deep economic downturn caused by the coronavirus pandemic.

The 27 leaders of the EU did not put out a joint statement after meeting over video conference on Thursday, which diplomats blamed on both the difficulty of the format of being unable to meet in person, and the extent of divisions between the governments.

They rubber-stamped a prior agreement by finance ministers to allow member states to seek support from the EU’s bailout fund, and for a package of loans to be made available for businesses from June.

But the most contentious matter of how to pay for a recovery fund and what form it should take was given over to the technical experts of the European Commission for detailed development.

There was broad agreement that the recovery plan should be linked to the bloc’s budget, and Germany signalled it was willing to increase its funding to give it more firepower to combat the slump.

The heads of the European institutions said a large increase was required to fight a downturn “unprecedented in modern times”. “We are not talking billion, we are talking trillion,” said European Commission president Ursula von der Leyen. She noted that the economic damage of the pandemic would not be evenly felt across the EU, and warned that unless strong action was taken it would increase economic imbalances between weaker and stronger economies in the union.

But several countries warned their approval would depend on how the contentious details are worked out. Taoiseach Leo Varadkar said he had argued for “urgent financial support for farmers”. This reflects Ireland’s long-held position of protecting EU farming payments in budget talks, and is just one example of how national priorities will need to be balanced in order to agree a coronavirus recovery plan if it is linked to the EU budget.

There is a broader philosophical difference over funding between members, and it breaks down roughly into two camps. The “frugal” states, including the Netherlands and Sweden, resist paying extra into the EU budget. They oppose taking on shared debt to fund the recovery, and believe that assistance to struggling states should be in the form of loans that must be paid back.

The other side of the argument is represented by states such as Italy and Spain. They have called for swift and dramatic action to counter the deep impact of the pandemic, which has worsened the precarious state of weaker economies, and have called for assistance in the form of grants rather than loans that would further increase their debt.

Ahead of the conference, nervousness on financial markets had pushed up the cost of borrowing for Italy, leading to concerns that urgent action was needed to prevent deepening of its financial trouble.

But Greek prime minister Kyriakos Mitsotakis said help should come in the form of grants – and quickly. “Europe must not once again do too little, too late,” he warned.