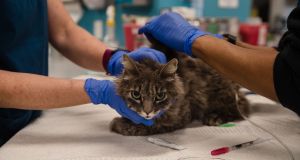 A cat is looked over at the clinic at the San Diego Humane Society on Tuesday. Photograph: AFP via Getty Images

Two cats in New York have become the first pets in the United States to test positive for the new coronavirus but there is no evidence pets can spread the virus to humans, according to US health authorities.

The cats, from separate areas of New York state, had mild respiratory illness and are expected to make a full recovery. It is believed they contracted the virus from people in their households or neighbourhoods, according to the US Centers for Disease Control and Prevention (CDC).

“Animals, pets, can get infected ... There’s no evidence that the virus is transmitted from the pet to a human,” Dr Anthony Fauci, director of the National Institute of Allergy and Infectious Diseases, said at the daily coronavirus briefing.

There are few known Covid-19 infections of pets globally. According to the American Veterinary Medical Association, one cat in Hong Kong tested positive without displaying symptoms, while a cat in Belgium recovered nine days after falling ill.

Five tigers and three lions at the Bronx Zoo in New York have also tested positive for Covid-19, including one tiger who never developed a cough, according to the Wildlife Conservation Society, the non-profit which runs the zoo.

“Our cats were infected by a staff person who was asymptomatically infected with the virus or before that person developed symptoms,” the WCS said on Wednesday. “All eight cats continue to do well. They are behaving normally, eating well, and their coughing is greatly reduced.”

None of the zoo’s leopards, cheetahs or puma are showing any signs of illness, it added.

The CDC said coronavirus infections have been reported in very few animals worldwide, mostly in those that had close contact with a person with Covid-19. It is not recommending routine testing of animals at this juncture.

The AVMA similarly said it was not changing its basic guidance for pet owners and veterinarians, adding that any test of an animal should be performed in coordination with public health officials.

Maine-based animal health company IDEXX Laboratories Inc on Monday rolled out a Covid-19 test for pets, which it said would be available to veterinarians in North America this week and distributed internationally after that.

IDEXX said it has conducted more than 5,000 tests in cats, dogs, and horses with respiratory symptoms in 17 countries and has found no positive results, suggesting pets “generally remain uninfected, except in rare and isolated cases”.

The company developed its test specifically for use in animals and its laboratories are not approved for handling human specimens, it said.

The United States has the world’s largest number of coronavirus cases at over 830,000, with 47,050 deaths as of Wednesday. – Reuters