EU at ‘moment of truth’ after crisis divisions

Debate provoked by coronavirus crisis goes beyond how to fund spending 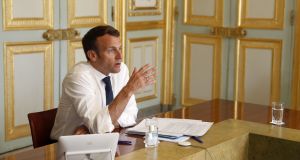 Emmanuel Macron: “We are at a moment of truth, which is to decide whether the European Union is a political project or just a market project.” Photograph: Yoan Valat/EPA

Times of crisis can be formative. As the European Union grapples with how to respond to the worst pandemic and economic crisis in a century, it is fuelling debate about what the bloc should be, and even about the future of globalisation and capitalism itself.

Next Thursday, when the leaders of the 27 member states gather over video conference, they will be split according to whether they want a pared-back EU that is primarily an economic and trade arrangement, or a better-funded bloc that smooths economic inequalities between members and promotes European interests in the wider world.

“We are at a moment of truth, which is to decide whether the European Union is a political project or just a market project. I think it’s a political project,” French president Emmanuel Macron said in an interview with the Financial Times, in which he said agreeing jointly-backed debt was essential to prevent the rise of populists across the Mediterranean.

“We need financial transfers and solidarity, if only so that Europe holds on,” he said.

Ireland, Italy, Spain, France and four other countries have backed the appeal for shared debt, arguing it is a structural shift appropriate to the scale of the challenges posed by the pandemic. But a block of northern states have ruled out the idea.

Italy and the Netherlands represent the two poles of the debate. The gulf in views in each country shows how euroscepticism has taken on different forms across the EU, even as it grew in reaction to old standoffs and worked its way into the heart of domestic politics.

In the Netherlands, a storied euro-critical streak has long favoured a cheaper and less integrated EU where every state must strictly follow spending rules.

According to this view, Dutch taxpayers paid the price for the profligacy of Mediterranean states through the bailouts of the euro zone debt crisis of the 2010s, and granting any extra cent to the EU budget is a domestic political embarrassment.

In Italy, eurocritical sentiment demands an EU of greater largesse. Disillusionment with the bloc is driven by a sense of abandonment, a belief that EU help has been insufficient, and by old bitterness over years of austerity and stagnant growth due to a combination of domestic problems, old debt obligations, and EU spending restraints.

The campaign for joint debt received a boost on Friday when the European Parliament voted with a large majority in favour of “recovery bonds” in a motion backed by the chamber’s main political groups.

Another idea advocated by MEPs from Macron’s Renew Europe group promotes a “grand bargain” in which the European Commission would borrow directly from markets, and be given the power to directly repay it by raising money by taxation of things like plastic.

But the debate provoked by the crisis goes beyond how to fund spending, extending to questioning the current model of capitalism itself. According to a manifesto published by 170 Dutch scientists, it is the way economic growth is measured that should be altered, to discount fossil fuel industries and incentivise spending on public transport, education, and health systems.

Macron declared the crisis “will change the nature of globalisation”.

“Particularly in recent years it increased inequalities in developed countries. And it was clear that this kind of globalisation was reaching the end of its cycle, it was undermining democracy,” he said.

How will the debate on the future of the EU be resolved?

All eyes are turned to the heavyweight who is often the last to lay her cards on the table: German chancellor Angela Merkel, a cautious political operator known for making bounds of leadership in the past. Many believe that if Merkel believes the European project is at stake, she will act.

The former Italian prime minister Enrico Letta has sounded the alarm. “There is a mortal risk for the European Union and we have to act to avoid this mortal risk,” Letta told a briefing of the Institute of International and European Affairs. “I think the last chance is next Thursday, the European Council next week.”