Contact tracing information to be ‘actively’ shared across Border

A pilot contact tracing scheme to begin early next week 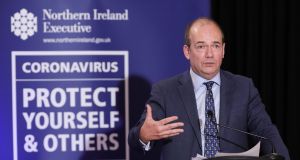 Contact tracing information will be “very actively” shared across the Border as part of a programme of enhanced testing and tracing to be trialled shortly, the North’s Chief Medical Officer has said.

It is to be expanded into a four-week training programme involving 300-600 staff “so that we are ready to turn that service on when that’s required”.

Thirteen more people with coronavirus have died in hospital in Northern Ireland, according to the latest figures from the Department of Health.

It brings the total number of deaths in hospital among patients confirmed to have coronavirus, also known as Covid-19, to 263.

According to the daily update released on Thursday afternoon, 142 further positive cases have been identified, bringing the total number of confirmed cases to 3,016.

A total of 689 people who are either confirmed or suspected to have coronavirus are being treated in hospitals in Northern Ireland, with 37 patients in intensive care. More than 2,700 have been discharged.

Contact tracing stopped in Northern Ireland and in the rest of the UK in mid-March, and has been a key point of difference between the approach in the North and that of the Republic.

Sinn Féin’s Colm Gildernew said the conversations that were taking place with his colleagues in the Republic of Ireland focused on using common technology such as digital apps to support contact tracing and, given the flow of people across the Border, on “ensuring that we’re able to exchange that information rapidly” across the island.

“We are plugged into colleagues in the Republic of Ireland using the digital platform that they are using to enhance contact tracing, because obviously the two systems will have to talk to each other,” he said. “We’re going to have to share information very actively.”

Meanwhile, there were further indications on Thursday that Northern Ireland could choose to adopt its own timetable with regard to relaxing coronavirus restrictions.

The First Minister, Arlene Foster, said decisions to emerge from lockdown would be “led by the criteria that will be set down and agreed by ourselves in the Northern Ireland Executive in conjunction with our colleagues in the other parts of the UK”.

Because of that, she said, “you could well see different parts of the United Kingdom move in different time to other parts”.

The North’s Minister of Finance, Conor Murphy of Sinn Féin, said at the daily press briefing that the North was “responsible for setting our own regulations and we have our own set of circumstances”.

It was, he said, part of an island which had had a “roughly similar experience” and which was on a “different trajectory” to that in Britain, and these factors would be taken into consideration “when we plan our own emergence from this”.

However, all parties have said it is too early to ease restrictions. The Minister for Economy, the DUP MLA Diane Dodds, said any discussion about what the recovery should look like was still at the planning stage. “No decisions have been made on any of these so far.”

The Executive will discuss on Friday whether to reopen cemeteries, which were closed in the North to prevent the spread of coronavirus but which have been the focus of much recent controversy.

Both the First Minister and Mr Swann have said they believe they should reopen. Mr Murphy said he was “hugely sympathetic to people who want to visit loved ones” but “the key message has been to stay at home to save lives”.

The Police Service of Northern Ireland (PSNI) announced on Thursday that investigations into Troubles-era killings, which had been suspended to free up officers during the coronavirus pandemic, would resume from May 1st.

Meanwhile, the Minister of the Economy has said the suggestion from a ministerial colleague that some unionists were putting the economy ahead of public health was “deeply regrettable”.

Sinn Féin junior Minister Declan Kearney, who is also the party’s national chairman, wrote in An Phoblacht that “right-wing elements in the British cabinet” and “some unionists in the north of Ireland” were encouraging a relaxation of coronavirus restrictions, and suggested their motivation was a “typical capitalist reflex” that put the market economy first and prioritised “corporate greed over public welfare”.

Asked about the comments at the daily press briefing, Ms Dodds said it was “a very regrettable intervention by the junior Minister – this is not the time for either identity or ideological politics”.

“We need to ensure the first and foremost priority we have is to set aside difference and to ensure we protect and save lives,” she said.