Proposal leaves decision on limit, extent and timing of any deployment to president 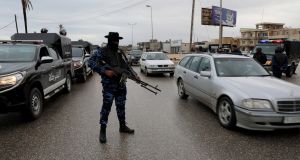 A member of Libya’s central security support force holds a weapon during a security deployment in the Tajura district, east of Tripoli, on Monday. Photograph: Ismail Zitouny/Reuters

Turkey needs to take measures “against all threats and security risks” that endanger its national interests, according to the motion, signed by Mr Erdogan on Monday.

The proposal leaves the decision on the “limit, extent, amount and timing” of any deployment to the president himself and adds that the government of prime minister Fayez al-Sarraj has requested Turkish support.

The state-run Anadolu agency reported that parliament speaker Mustafa Sentop urged the assembly to hold an extraordinary meeting on January 2nd. Both the ruling Justice and Development Party and the Nationalist Movement Party support the motion.

Turkey aims to send its navy to protect Tripoli, the capital and seat of government, a senior Turkish official told Bloomberg last week, speaking on condition of anonymity due to the sensitivity of the issue. Turkey earlier in December signed a maritime deal with oil-rich Libya that serves the energy interests of both countries and aims to salvage billions of dollars of business contracts thrown into limbo by the conflict.

Mr Erdogan said last week Turkey would deploy troops to Libya after Mr Al-Serraj’s government requested support to fend off the offensive by Gen Haftar’s forces. The move is meant to protect Turkish private investment in Libya and bolster its energy claims in the Mediterranean, but could also put Ankara at odds with other foreign players in the war.

Two senior Turkish government officials and two security officials, who spoke to Reuters on condition of anonymity, said Ankara had not yet deployed any Syrian fighters to Libya. “But evaluations are being made and meetings are being held on this issue, and there is a tendency to go in this direction,” said one official, adding no decision had been made on numbers.

It was unclear whether Ankara was mulling sending Syrian fighters as part of a first deployment into Libya.

Gen Haftar’s forces – supported by Russia, Egypt, the United Arab Emirates (UAE) and Jordan – have failed to reach the centre of Tripoli. But they have made small gains in recent weeks with the help of Russian and Sudanese fighters, as well as drones shipped by the UAE, diplomats say.

Mr Serraj’s government said on Sunday a video online purportedly showing Syrian fighters deployed by Turkey in Libya was false and actually shot in Idlib. However, the Syrian Observatory for Human Rights monitor cited sources saying 300 pro-Turkey Syrian fighters had been transferred to Libya while others were training in Turkish camps.

Turkey’s military has been involved in Syria since 2016. “The military’s experience abroad will be very useful in Libya. However, there is the possibility of using the experience of Syrian fighters as well,” said one of the security officials.

“After parliament accepts the mandate, a step may be taken in this direction,” the person added.

Ankara signed two accords with Libya’s government last month: one on security and military co-operation and another on boundaries in the eastern Mediterranean. The maritime deal ends Turkey’s isolation at sea as it ramps up offshore energy exploration that has alarmed Greece, Cyprus and others.

The military deal would preserve its lone ally in the region, Tripoli, and protect investments by construction firms and other Turkish companies.

Foreign minister Mevlut Cavusoglu has said Turkey aims to prevent Libya sliding into chaos. Mr Erdogan, who discussed the Libyan conflict with his Tunisian counterpart last week, has said a ceasefire in Libya must be set as soon as possible.

The deployment Bill was sent to parliament on Monday, prompting the main opposition party to reject it on grounds it would exacerbate conflict. The Bill’s text warned that Gen Haftar’s army had threatened Turkish companies in Libya and Turkish ships in the Mediterranean. “Turkey’s interests . . . will be negatively affected if attacks by the so-called Libyan National Army are not stopped and clashes become a severe civil war,” it said.

Turkey exported $1.5 billion in jewellery, furniture, poultry and other goods to Libya last year, more than quadruple the imports of mostly metals from the North African country.