Paris strikes: Glimmers of cheer for commuters despite ongoing disruption 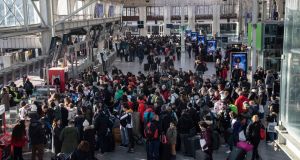 The start of a fourth week of French transport strikes saw some modest improvements for beleaguered commuters in Paris, with fewer Metro lines closed.

The strikes against government plans to reform the French pension system were still causing considerable disruption for users of the country’s high-speed rail network, with about half of trains cancelled.

The Eurostar link with the UK and Thalys connections with Belgium, the Netherlands and Germany were also still experiencing cancellations. Services remained severely disrupted on slower French regional and inter-city lines.

But for Paris-region commuters who have been hard hit by the strikes since December 5th, the return to work from Christmas holidays brought glimmers of cheer.

Just two Metro lines remained completely closed, compared to five that were closed on Friday. There were also improvements on other lines, although not a return to normal, as strikers stayed out for a 26th day.

The disruptions and shutdowns have outlasted a 1995 transport workers strike, testing the will of French president Emmanuel Macron to push through with plans to raise the official pension eligibility age to 64. Mr Macron argues the retirement overhaul would make the pension system fairer and keep it out of debt. –Reuters