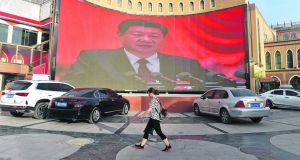 Pervasive security apparatus has subdued the ethnic unrest in the Xinjiang region. But it is also prompting many Han Chinese to consider relocating to other parts of the country. Photograph: Greg Baker/AFP/Getty

Increasing numbers of Han Chinese are eager to move out of the Muslim-dominated province of Xinjiang, which is wracked by inter-ethnic tensions, but there are widespread claims that administrative restrictions are forcing many to stay.

Government incentives offered to Han Chinese to relocate to the northwestern province have helped their numbers swell from six per cent in the 1950s to about 40 per cent currently of the 22 million population.

But safety concerns, ethnic tensions and a province under a virtual security lockdown are some of the factors prompting many Han to consider relocating to other parts of the country.

“Our safety is the biggest issue,” said Alice Liu, who said her family hoped to move from Xinjiang to Chengdu in Sichuan province.

“Uighurs have attacked Han before many times. Now things are very tense, it does not feel very safe,” she said, recalling the 2009 race riots in Urumqi that left 200 dead. “Many people I know want to leave.”

The slowing regional economy is also a factor, creating a lack of job and investment opportunities.

“There is one industry in Xinjiang now. Government security, that is it,” said John Wu, a small factory manager who moved from the eastern province of Shandong. “For any other business, it is very, very difficult.”

He would like to leave the troubled region, but the government is not letting many people like him transfer their all-important residential permit, or hukou, from Xinjiang back to their original province. Without a valid hukou, he would be a second-class citizen when he returned to Shandong, with his family unable to avail of healthcare, schools, social welfare and other government services.

Following terrorist attacks in the region in 2013 and 2014, the government unleashed a massive crackdown on what it called “the three evils” of separatism, terrorism and extremism. More than 100,000 new police officers were recruited and a highly elaborate high-tech surveillance network was implemented across the province.

Over the past three years, well over a million Uighurs and other mostly Muslim ethnic minorities have been interned in extra-judicial internment camps or placed into involuntary labour. More than 500,000 others have been convicted and jailed, many for minor offences.

The Uighurs have long condemned the influx of migrants as the “hanification” of the region. The official name for the province is the Xinjiang Uighur Autonomous Region, but Uighurs claim that in reality they have little or no autonomy. Some have called for independence and the establishment of an independent state called East Turkestan, something that would be anathema to Beijing.

There have not been any terrorist-type attacks in the region for more than three years – and local officials like to regularly say “China is the safest country in the world, and Xinjiang is the safest province in China” – but the security obsession continues to intensify.

In addition to their safety concerns, the settled Han community say daily life is impeded by the frequent road blocks and security checks; basic tasks like shipping packages and making bank transactions have become increasingly arduous and the internet is monitored so intently connection speeds are often glacial.

Finding workers is also a big problem, they say, with so many young Uighurs and other minorities sent to camps or prisons in recent years.

The Han civil servants who make up the large majority of government workers in the province also have their complaints.

As the central government pushes the ongoing crackdown, they work extremely long hours and rarely have days off, some said. On their days off they have to visit their “relatives” assigned to them as part of the “Pair Up and Become Family” programme, an initiative the government says promotes inter-ethnic harmony and understanding, but one the minorities decry as invasive in-home spying and a thinly veiled effort to assimilate them into a secular, Han-Chinese lifestyle.

The cadres privately complain they are obliged by their leaders to make these visits on their free time, and must use their own money to buy the hosts gifts to help sweeten the intrusive arrangement.

The top-down pressure is intense as Beijing appears to be decidedly unhappy with aspects of the provincial cadre performance in the crackdown in recent years.

Leaked government documents revealed by the New York Times showed that in 2017 alone the government opened more than 12,000 investigations into party members in Xinjiang for infractions in the “fight against separatism.”

And there are a lot more investigations to come, according to the Communist Party’s mouthpiece, the People’s Daily, last week.

The paper reported that more than 100 discipline inspection teams were soon to be dispatched to the province to launch sweeping investigations into the work of local officials.

“We highlight political supervision,” a spokesman said. “In handling cases, we must first reflect political standards and see if there are violations of political discipline and political rules.”

Han are already leaving the province in numbers, and the capital Urumqi alone has seen a decline of more than 20,000 residents over the past two years.

What is stopping more from leaving is the apparent suspension of many hukou transfer applications. Officials deny there is any policy to prohibit people switching their residence certificates from Xinjiang to another province, or a bid to curb migration out of the region, but no clear reasons have been given for the delays.

On some official websites a notice has been posted to say that, “Due to an on-going census, applications to relocate household registrations have been suspended until further notice.”

Comments on forums cast doubt a census could be causing a disruption to the system, as in cases where Han are actually moving into the province their paperwork is processed promptly.

Reports suggest many have already opted to leave without deregistering their residence permit, preferring to go without government benefits to remaining in the region. Others hang on in hope of a bureaucratic change of heart.

“Right now though it seems they want to keep as many of us Han here as possible,” Mr Wu said. “They want it to stay a very mixed province.”