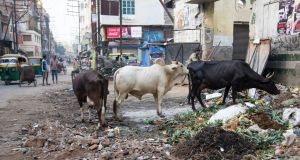 Cow protection is an issue that has dominated Indian politics since Narendra Modi was elected prime minister in 2014. Photograph: Graham Crouch/New York Times

The BJP government in India’s northern and most populous Uttar Pradesh state, for instance, is on course to establish “cow safaris” to ensure the welfare and safety of these sacred animals.

“Our government is vigilant towards cow protection and it is our duty to save and secure them by setting up cow safari parks,” state animal and husbandry minister Laxmi Narayan Chaudhary said recently in the state capital, Lucknow.

The proposed parks would house 15,000 to 25,000 cows each and offer tourists the opportunity to visit them and have darshan, he said. In India, darshan means paying obeisance to a holy person or deity.

Under the cow safari scheme these parks will largely house barren cows, long past their milk yielding years, which freely roam the state.

Recent legislation in some 20 of India’s 29 BJP-ruled states bans cow slaughter; anyone found guilty of killing a cow in Modi’s western home state of Gujarat and Haryana in the north, can face imprisonment of up to 14 years. The average jail term for cow slaughter in other states varies between five and seven years.

For Uttar Pradesh chief minister Yogi Adityanath, cow protection has been a priority ever since he assumed power in March 2017. He has implemented numerous measures to implement his objective at great cost.

Within weeks of tasking office, Adityanath, a Hindu monk, began a cow ambulance service in a state that badly lacks basic medical facilities for its largely indigent population of more than 210 million, many of whom live in wretched conditions.

Each of the ambulances, which are part of the Cattle Healing Mobile Van Service, is staffed with an animal paramedic and is authorised to initiate legal action against those who abandon their cows once they stop providing milk.

The state government has also circulated a toll-free number to assist the authorities in rescuing cattle in distress, a stark deviation from a non-existent equivalent for humans.

And in August Adityanath’s administration approved a scheme by which the state exchequer apportioned a monthly allocation equivalent to €11.40 – a substantial sum in India – for each cow’s wellbeing.

It has also issued orders to private sector companies to use their corporate social responsibility or CSR funds to provide facilities for abandoned cows in rural areas. In India, private sector concerns with an annual turnover of €12.7 million have to mandatorily contribute 2 per cent of their profits for public schemes.

Meanwhile, in central Madhya Pradesh state, 10 blankets donated to a cow shelter for the animals is one sure way of obtaining a gun licence, normally difficult, if not impossible to secure, anywhere in the country.

Instructions to execute this unique transaction were issued in mid-December by Anurag Choudhary, the collector or administrative head of the state’s main Gwalior district, after he visited a cow shelter where six of the animals had died of cold.

Madhya Pradesh is ruled by the opposition Congress Party, which assumed office a year ago after routing the incumbent BJP government in provincial elections. But analysts concur that Congress competing with the BJP with regard to cow protection, an issue that has dominated Indian politics since Modi was elected prime minister in 2014.

On that occasion the BJP was the first party to obtain a parliamentary majority, and its prioritisation of cow preservation policies was considered to have played a significant role inthis.

Since then some BJP leaders have sough to imbue the revered animal with extraordinary powers. A senior party representative from Bengal recently declared that milk from Indian cows contains traces of gold generated from sunlight.

Speaking at a public rally in his home state, Dilip Ghosh – president of the BJP’s West Bengal unit and a member of parliament – said the hump on the backs of Indian cows, unlike those from abroad, had an ingrained “swarnanari” or gold artery, which after sunlight shone on it created traces of gold in its milk.

That’s the reason cows’ milk in India is yellowish in colour, he said, adding that Indian cows, which many Hindus referred to as “Gau Mata” or cow-mother, were superior to those from other countries.

Foreign cows, Ghosh said, were no better than “low animals” and not worthy of being mothers to Hindus; they qualified only as “aunties”. “It is not good for the country if we worship such aunties,” he cautioned.

These remarks generated an outburst of indignation and sarcasm on social media. One commentator said thieves should give up robbing ATMs and banks but take to looting dairies instead.