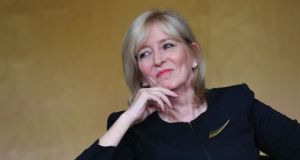 Emily O’Reilly been re-elected to the position of European Ombudsman after receiving the backing of 320 MEPs in a secret ballot.

Ms O’Reilly, a former journalist who became the first female Ombudsman in Ireland before being appointed to the Strasbourg post, received 240 votes in the first ballot.

In the third ballot, members had to choose between Ms O’Reilly and Estonian Julia Laffranque.

Speaking to The Irish Times, Ms O’Reilly said she was “delighted and relieved” after what she described as “very tough campaign.”

On the campaign trail, she spoke about her ongoing battles with the European institutions over transparency, and particularly Brussels’ 25,000-strong legion of lobbyists.

She says she encountered resistance. “I felt it through the campaign. I was being told that the approach I had taken wasn’t welcome and perhaps they didn’t want a strong ombudsman, they wanted someone to go off into a little office and deal with things in a way that is not contentious.”

She said while she has been forthright in her work, “I don’t wake up in the morning and think to myself, who am I going to torture today?”

She had a notable success when the Commission recently announced new procedures for the appointment of its general secretary.

The promotion in 2018 of Martyn Selmayr, Jean-Claude Juncker’s chef de cabinet, to the job of heading the EU services as secretary general was a cause of controversy.

Ms O’Reilly conducted an inquiry into the affair which was critical of commission procedures and found “maladministration” in its work. It resulted in the new commission under Ursula Von der Leyen requiring that in future the job be advertised with a clear timelines and advertisements.

She says she will focus on three areas in her next term which runs until 2024, namely the climate emergency, defence and migration.

“We have carried out strategic investigations, things that come about not necessarily on the basis of a complaint but where something pointed towards a problem.

“We have a tiny office of less than 70 people and we punch above our weight. I want to practice what I preach in terms of turning this into a model office.

“Migration is a hugely sensitive issue in most member states and we can see how it is used politically.”

She said work is ongoing to look into the role of the border agency Frontex and how it manages itself.

On climate change she says that “everybody can say nice words about this but politically these things can be difficult, whether it is in relation to agriculture and cows and methane or smoky coal. People can have big ideas and mean it, but there can be practical difficulty.

“Where I come in is in relation to how we can see what members states are doing in the EU.”

She said most people would know what the Irish Government is planning on climate change, or what the opposition’s policies are on the same topic, but that there can be ambiguity about what happens at a European level.

The watchdog’s office exercises ‘soft powers’ by dealing with complaints from people and legal entities, concerning maladministration in EU institutions, but also proactively looks into broader systemic issues such as transparency.