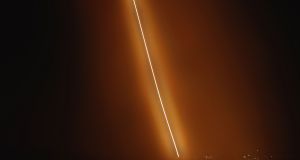 Israel’s Iron Dome anti-missile system fires an interceptor missile as rockets are launched from Gaza towards Israel in the southern Israeli city of Sderot, on Monday. Photograph: Jack Guez/AFP/Getty Images 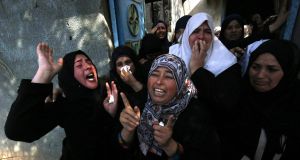 Relatives mourn the death of Hamad al-Nahal, a member of Islamic Jihad killed in an Israeli air strike on the Gaza Strip a day earlier, during his funeral in Rafah on Tuesday. Photograph: Said Khatib/AFP/Getty Images

Israel and the militant groups in Gaza reached a fragile ceasefire on Monday night with each side indicating that quiet will be met with quiet.

After the most serious escalation since the 2014 Gaza war, Egyptian intelligence officials and the United Nations Middle East envoy Nikolay Mladenev succeeded in preventing a wider conflagration that threatened to bring Israel and Hamas close to another war that neither side really wanted.

Militant groups fired more than 460 projectiles into southern Israel in a 25-hour period while Israeli planes targeted some 160 sites across the Gaza Strip. At least six Palestinians were killed, four of them fighters, along with a Palestinian labourer who was killed when a missile hit a residential apartment in the Israeli coastal city of Ashkelon.

Declaring the truce on Tuesday evening the militant groups in Gaza committed to maintaining calm “as long as the Zionist enemy respects it”. Hamas held a number of “victory” celebrations in cities in the enclave on Tuesday night.

The ceasefire was agreed after the militant groups had threatened to extend their rocket fire to the Israeli cities of Ashdod and Beersheba if the Israeli attacks continued.

Israeli prime minister Binyamin Netanyahu convened the security cabinet for seven hours of discussions on Tuesday but when no decision was taken to call up army reservists it was clear that Israel was not making plans for a ground offensive, despite calls from right-wing ministers in recent months to topple the Hamas regime.

Four Israeli ministers on Tuesday night said they opposed the ceasefire with Hamas and hundreds of angry residents of Sderot, close to the Gaza border, burned tyres to protest at what they termed Israel’s capitulation to Hamas.

Speaking in Paris, just before the latest flare up, Mr Netanyahu made it clear that Israel supported Egyptian efforts for a long-term truce. “I am doing everything I can to prevent an unnecessary war. No political solution exists for Gaza, just as there isn’t one with [terror group] Isis,” he said.

The latest escalation began when undercover Israeli special forces operating inside Gaza were exposed on Sunday by Hamas fighters as they were heading back towards the border. A Hamas commander was among seven militants killed in the ensuing fire fight, along with an Israeli officer.

Egyptian mediators will now continue with efforts to reach a more lasting calm after positive signs in recent weeks. After Hamas toned down the weekly border protests Israel agreed to the transfer of more than €15 million from Qatar to pay the salaries of Gaza civil servants. Fuel deliveries were also increased, allowing Gaza residents to enjoy more hours of electricity for the first time in months.

The next stages of the arrangement include a series of rehabilitation projects to ease Gaza’s humanitarian crisis, and Hamas handing over control of elements of the Gaza government to Palestinian president Mahmoud Abbas’s Palestinian Authority.