Look at My World: Malvina, Diaa and Love, a short documentary on the romance between a German woman and a Syrian man, has been labelled as "indoctrination" by Germany's far-right movement. Video: Kika 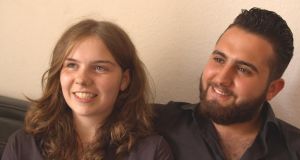 Most days, German public television children’s channel Kika treats its young viewers to a mix of light dramas about mermaids and koala bears, as well as science and other factual programmes.

Now Kika finds itself in the middle of a cultural war over a thought-provoking documentary about the troubled romance between a teenage Syrian man and his younger German girlfriend.

Over the course of 25 minutes, Look at My World: Malvina, Diaa and Love tells the story of their relationship, the cultural clash at its heart and, hovering in the background, unresolved tensions in German society to the consequences of the 2015-16 refugee influx.

Out of deference to her Muslim boyfriend, for instance, Malvina has stopped eating pork and no longer wears revealing clothes.

“I’m not allowed put on short clothes, just long things,” she said, joking that her relationship is more important to her than hotpants. Her boyfriend, Diaa, adds: “I cannot accept when my woman looks like that. It is so difficult for Arab men.” Later he tells of his difficulty seeing her hug her best friend, a teenage boy.

“I don’t like it when other guys talk with my girlfriend. She belongs to me. I belong to her.”

But Malvina is no shrinking violet, telling him: “It’s not your business telling me who I can talk to.”

In one scene, Diaa says how he would like to see Malvina convert to Islam and cover her hair. She makes clear she is not interested in either.

The documentary was originally broadcast in November but now finds itself caught up in an ideological war, weeks after an Afghan refugee was charged with stabbing to death his 16-year-old ex-girlfriend with a kitchen knife in a drug store. The man claimed to be also 16 but has since admitted being older.

Despite his thick beard, the documentary suggested Diaa, the Syrian man, was about the same age as his girlfriend. Now Kika has corrected the record, saying he is three years older: 19 now and 17 when he met her, when she was 15.

That correction and the film’s contents have prompted outrage from the far-right Alternative für Deutschland (AfD) and far-right websites. They see it as inappropriate for a children’s channel to show what they call a manipulative “indoctrination” film about a dominant Arab man grinding down a defenceless German girl.

AfD politician Dirk Spaniel said it was “unbearable” to watch a “young girl ... instrumentalised” for a manipulative film”.

“His broken German is enough to make clear that he considers his culture and religion non-negotiable,” noted one far-right blogger.

But others say the far right’s furious reaction confirms the film’s main theme: the couple’s ambivalence to each other and the external pressures faced in particular by young German women who fall in love with asylum seekers and refugees.

Even Malvina’s best friend – a blond German teenage boy – expresses misgivings, suggesting Diaa “wants to intervene strongly in your private life”. But then he adds: “yet you know what you are doing.”