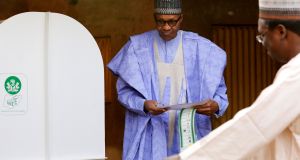 Nigeria’s long-awaited presidential election has arrived, amid heavy gunfire, voting technology failures and reports of vote-buying in some areas.

Some voters arrived at polling stations at 3am to ensure their vote was counted in an election expected to be dominated by the incumbent, Muhammadu Buhari, and the former vice-president Atiku Abubakar.

“I will congratulate myself. I’m going to be the winner,” said Mr Buhari, after casting his vote in his northern hometown of Daura, responding to a question about whether he would congratulate his opponent if he lost.

Hundreds of people fled Geidam in the northeastern state of Yobe after a reported attack by the Islamic State-affiliated Boko Haram splinter group Iswap. In Maiduguri, people woke to the sound of heavy gunfire, but authorities said it was “not targeted at members of the public but was for security purposes” as they called on voters to come out en masse.

“There’s no attack on any part of Maiduguri and hence no threat to public peace and order,” a police spokesman said. Some Maiduguri residents questioned why the security forces would choose to hold an unannounced drill likely to cause panic only a few hours before polls opened.

Ibrahim Usman, who voted in Maiduguri, said his elation at being able to vote was almost destroyed by the failure of smart card readers at his polling station in Abbaganaram primary school. The readers, and the permanent voter cards (PVCs) needed to use them, were introduced in 2015 to accredit voters.

“It delays the process, and can you believe that it took the wisdom of the party agents to agree to the use of manual ways?” Mr Usman said.

In Lagos in the south, young people woke early and braved the drizzle to get to polling stations, with some planning to vote for candidates outside the establishment.

“They [Abubakar and Buhari] are both terrible people and not fit to be president,” said Oluchi Nzeadibe (27), an advertising executive who arrived at her polling station at Ebute Metta just before 8am to avoid long queues. She said she would vote for the former deputy central bank governor Kingsley Moghalu.

“I don’t think Atiku will bring any real change if he wins. And all the ‘experience and leadership’ they’ve sold us at all levels, what has it brought us really? This old bunch needs to go. Let’s have a Justin Trudeau for once – a younger person. I’m voting Moghalu because he’s different and hasn’t been in power before.”

Voters reported that agents of the two major parties, the All Progressives Congress (APC) and the People’s Democratic Party (PDP), arrived at many polling booths offering financial inducements to voters.

Fatoye Oluwaseyi, a lawyer, said he had to politely dismiss agents from both parties who approached him with 5,000 naira (€12). He told them he had made the decision to vote out Mr Buhari’s administration a year ago.

Mr Oluwaseyi’s said he was voting against the ruling party because Mr Buhari’s administration has been “inept” and showed a “brazen disregard for the rule of law”. – Guardian