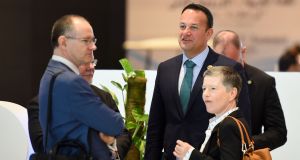 The EU can offer Britain “assurances” on the Brexit withdrawal deal but will not provide something which alters its fundamental shape, Taoiseach Leo Varadkar has said.

Mr Varadkar also said the timing of another vote on the deal in the House of Commons is “not under my control”.

British prime minster Theresa May has postponed a vote that was due to take place this week until mid March, just weeks from Brexit day at the end of March.

The Taoiseach said any reassurances on the deal cannot “contradict the legal reality” of what has already been agreed. He will meet Mrs May and other EU leaders on the margins of the summit to discuss Brexit.

At the centre of the continuing Brexit impasse is the backstop, the insurance policy to avoid a hard border if the EU and UK fail to agree a trade deal after Brexit which would keep the border open.

The backstop would see the UK as a whole remain in a customs union with the EU, with add ons in both customs and regulations for Northern Ireland.

Many Brexiteer MPs fear it could tie the UK permanently into the EU’s economic orbit, although it is only intended to remain in place “unless and until” a trade deal which keeps the border open is agreed.

The difficulty in passing the Brexit withdrawal agreement, including the backstop, through the House of Commons has increased fears of a crash out, no deal Brexit at the end of March.

Agreeing a deal would see the UK enter a transition phase until the end of 2020, although this could be extended. This would effectively maintain the status quo, with the UK staying in the European single market and customs union even as it is not a full EU member.

“Let’s not forget this March 29 deadline is a self imposed deadline,” Mr Varadkar said. “It is one that the United Kingdom has imposed on itself. Nobody in Ireland or the EU is threatening no deal. This is a situation the UK has created for itself.”

Mr Varadkar again ruled out a time limit or unilateral exit clause for the backstop, as has been pushed for by London.

“The whole point of the backstop is to give us an assurance that we won’t see the emergence of a hard border between Northern Ireland and Ireland, no matter what else happens as a consequence of Brexit.”

“We’re happy to discuss with the United Kingdom assurances that they may need to have further confidence that the backstop if ever applied, will not be permanent. It will only apply unless and until something supersedes it.

“So we are happy to talk about mechanisms to give them that reassurance that some of them need. However, we can’t agree to something that would contradict the legal reality or the spirit behind what has already been agreed.”

He repeated that there are “no plans” for border checks with Northern Ireland in a no deal scenario. However, he said: “We do appreciate that in the event of a no deal we’ll be under obligation to protect the integrity of our single market, our customs union, which we are part of and intend to be a full member of.”