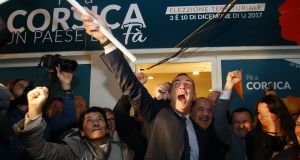 Corsican nationalists appear certain to win an absolute majority on Sunday in elections to a new assembly that will merge three former administrative bodies on the French Mediterranean island with a population of 324,000.

But don’t expect a Scottish-style independence referendum any time soon.

The Pé a Corsica (For Corsica) list, led by Jean-Guy Talamoni and Gilles Simeoni, won 45.36 per cent of the vote in the first round on December 3rd. Conservative lists trailed on 14.97 and 12.77 per cent. President Emmanuel Macron’s La République en Marche came in fourth, on 11.26 per cent. Extreme left- and right-wing parties did not make it to Sunday’s run-off.

The assembly election marks the nationalists’ fourth electoral victory since the National Front for the Liberation of Corsica (FLNC) laid down its arms in 2014. It is a significant turning point in the island’s troubled history, the culmination of a bullets-to-ballot box progression that will be familiar to Irish readers.

He refers to France as a foreign, albeit friendly, country. He believes the island will achieve independence 'before my death'

The FLNC and subsequent break-off groups started a campaign of bombings, assassinations, racketeering and vendettas in the mid-1970s. Hooded gunmen in camouflage uniforms held late-night press conferences in remote locations. The line between nationalists and organised criminals was often blurred.

Talamoni is known as “the Coriscan Puigdemont”, after the Catalan leader whose declaration of independence inflamed Spain this autumn. Back in 2000, Talamoni told this correspondent: “Everything we have obtained, we obtained through violence.” When the quote was taken up by the French press, Talamoni claimed I had misunderstood him. I kept the tape recording.

Today, the dashing lawyer who exuded a whiff of sulphur has become a stubble-faced 57-year-old with thinning grey hair. Talamoni is president of the Corsican assembly and teaches literature at the University of Corte. He refers to France as a foreign, albeit friendly, country. He believes the island will achieve independence “before my death”.

Talamoni leads the “independentist” wing of Pé a Corsica, while Simeoni, the president of the Coriscan executive, is the “autonomist” leader. The men were rivals until they joined forces in December 2015 territorial elections. “Autonomists” outweighed “independentists” by a ratio of more than two to one, but Talamoni dominates media coverage.

Talamoni continues to hold a more radical discourse. As recounted by Le Monde, he refuses to join in the French anthem, the Marseillaise, but stands “out of respect” when it is sung. In February 2016, Simeoni attended a memorial to Claude Erignac, the French prefect on the island whose assassination in Ajaccio in 1998 is considered the single worst act of anti-state violence during the Corsican troubles. Simeoni, like Talamoni a lawyer, defended Yvan Colonna, who is serving a life sentence for Erignac’s murder.

Talamoni refused to attend the memorial, saying he preferred to wait for “an homage to all victims of the last 40 years, in the framework of a symbolic reconciliation of all those who suffered from the conflict”.

Charles Pieri (67), a former FLNC leader nicknamed “the old man” who was badly wounded in a car bombing in 1996, is a member of Talamoni’s group, Corsica Libera. At a recent campaign rally, Talamoni promised to deliver Corsica “out of the night into which France has plunged us”.

Economic necessity explains the relative moderation of Corsican nationalists. Corsica is poorer than the rest of France. “Realism has triumphed,” said Le Figaro following the first round. “The separatists finally understood they don’t have the means of their ambitions, contrary to their Iberian comrades. Barcelona may not need Madrid to live. Corsica cannot do without Paris.”

We want democracy. We want an emancipated island. It’s up to Paris to meet us half-way, so that together we can elaborate a political solution

Nationalists demand amnesty for approximately 30 militants held in mainland French prisons, recognition of the “Corsican people” and official status for the Corsican language, on a par with French, a demand rejected by Macron. They want control over tax revenue raised on the island. They want to diminish the high proportion of houses bought as holiday homes, by forcing “continentals” to apply for permanent residence status. Graffiti saying “IFF” for I Francesi Fora or “French Get Out!” is still common.

Talamoni and Simeoni believe Pé a Corsica will achieve a degree of legislative, administrative and legal autonomy within three years. “This is a very strong message addressed to Paris,” Simeoni said after the first-round victory. “We want peace. We want democracy. We want an emancipated island. It’s up to Paris to meet us half-way, so that together we can elaborate a political solution.”

Prime minister Edouard Philippe’s office refused to comment on the first round results. During his presidential campaign, Macron called for “the emancipation of Corsica” and “autonomy within the republic”, but it’s not clear what that means. Macron says the Corsican language can be taught freely, but “the republic has only one language”.

Following Sunday’s election, he is expected to appoint a Monsieur or Madame Corse to oversee relations with the fractious island.