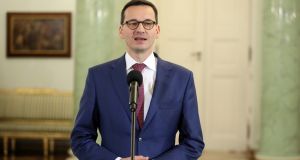 News of the promotion of finance minister Mateusz Morawiecki, one-time chief executive of AIB’s former Polish subsidiary, is part of a wider cabinet reshuffle not due until the new year.

The ruling Law and Justice (PiS) party dismissed speculation the early announcement was an attempt to distract attention away from Friday’s parliamentary vote on a final series of controversial judicial reform measures.

After constitutional court reforms criticised as illegal last year, Friday’s Bill increases political control over the supreme court. The European Commission has criticised the new Bill, likely to be signed into law by the president, over provisions to force the immediate resignation of dozens of court judges and lower the mandatory retirement age.

The commission warned the move “jeopardises the independence of the judiciary as a whole” and risks reducing Poland to an illiberal democracy. After reforming state media and abolishing an independent public prosecutor, the Polish government says its judicial reforms are essential to eliminate inefficiencies and post-communist cronyism in the court system.

Behind the scenes of Friday’s parliamentary vote, allies of outgoing prime minister Beata Szydlo fumed at her resignation halfway through the government term. The conservative Ms Szydlo was plucked from relative obscurity to lead the PiS campaign in 2015 and secured an absolute majority.

Two years in, despite tensions with the EU and its western neighbours, her government is riding high in polls on 47 per cent – 10 points higher than on election night. But the prime minister had little authority over her ministers, who governed by going directly to the real power in Warsaw, PiS leader Mr Kacyznski.

On Thursday, he switched his allegiance to 49-year-old Mr Morawiecki, who only joined the ruling party last year.

Seasoned Polish advisers suggest Mr Morawiecki – with fluent English after studying in Germany, Switzerland and the US – might be a better ambassador for Poland abroad than Ms Szydlo, a miner’s daughter from southern Poland and the country’s first woman leader.

But the move is not without risks for the PiS voter base, who liked Ms Szydlo – and the switch has caused unprecedented splits within the PiS party.

Warsaw watchers see a link between Mr Marowiecki’s appointment and next year’s looming EU budget battle – a crucial source of funding for the Polish economy and Mr Morawiecki’s reform agenda.

“It is crucial to have someone who can talk to Brussels in a more civilised tone than of late, and Szydlo couldn’t do that,” said Eugenisuz Smolar, of the Centre for International Relations in Warsaw. “But Morawiecki is window dressing and won’t change the fundamentals. He’s not a liberal but a Polish patriot and nationalist.”

A multilingual, foreign investor favourite, Mr Morawiecki has not pulled his rhetorical punches since entering Polish politics. He asked EU officials to butt out of Polish reform efforts, justifying them as necessary to remove “widespread pathology” in the judicial system.