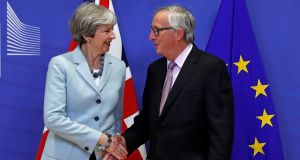 With the signing off on Friday by the UK and the European Commission on a joint summary of the Brexit divorce talks for approval at next week’s summit, Brussels began to set out the scope of discussions on the EU-UK future relationship.

The commission agreed to recommend to the summit next Thursday that “sufficient progress” had been made in the three priority areas of talks following a late night deal on the stalled Border issue which brought UK prime minister Theresa May to Brussels for a early morning signing ceremony with commission president Jean-Claude Juncker.

The breakthrough was heralded by a senior official’s “white smoke” tweet. On the assumption that the leaders will endorse the deal and allow the start of future relationship talks, the European Council issued a set of guidelines also for their approval setting out a mandate for talks on transition by the UK after Brexit. These are based on an assumption that the UK will simply continue to act as a member state for a period probably of two years, although without the right to attend meetings.

The guidelines insist that it will be expected to abide by all the rules of the internal market and to enforce the union’s external borders. “There can be no cherry-picking”, a senior official warned.

The paper makes clear that although the EU may discuss a “framework” for a future relationship beyond transition, talks on a trade agreement can not start until after Brexit in March 2019.

Senior officials also warned that even discussions on transition may be delayed by the UK’s continued failure to clarify its intentions for the talks. The 16-page agreed joint statement sets out progress in the three priority talks areas, citizens rights, the financial settlement or “divorce bill”, and Northern Ireland.

On Northern Ireland, the paper sees a renewed “guarantee” from the UK of no hard border which it hopes to ensure by reaching a trade agreement with the EU that will see regulatory alignment across the whole of the EU-UK. In the absence of such an agreement the UK pledges to “maintain full alignment with those rules of the internal market and the customs union which, now or in the future, support North-South co-operation, the all-island economy and the protection of the Belfast Agreement”.

Other specific island-of-Ireland regulatory convergence will depend on consent from the Northern Ireland Assembly. The report also confirms commitments to maintaining the Common Travel Area, supporting the 142 areas of cross-Border co-operation and upholding the Belfast Agreement in all its aspects.

Both sides are committed to upholding equal reciprocal rights to live, work and enjoy “exportable” social welfare and pension rights of those of their citizens who settle in the other jurisdiction ahead of Brexit. Their families will have the right to join them. EU citizens living in the UK will see their rights transposed into UK law and upheld by its domestic courts which will have to take account of the jurisprudence of the European Court of Justice. For up to eight years UK judges will have the right to ask questions of the court whose rulings they will have to take account of.

There has also been agreement on the means of calculating the divorce bill . Although the agreement contains no figures, during talks the UK estimated a net payment of €40 billion-€45 billion while the EU put it at about €55 billion. When contingent liabilities, such as loans to Ukraine, are added the bill rises to an estimated €55.5 billion-€65.5 billion. But as the union comes close to closing the first chapter in the Brexit talks there was a salutary reminder that this may have been the easy bit.

“We all know breaking up is hard, but breaking up and building a new relationship is harder,” European Council president Donald Tusk warned. “The most difficult challenge is still ahead.”